Electricity Costs of a Rock Tumbler? 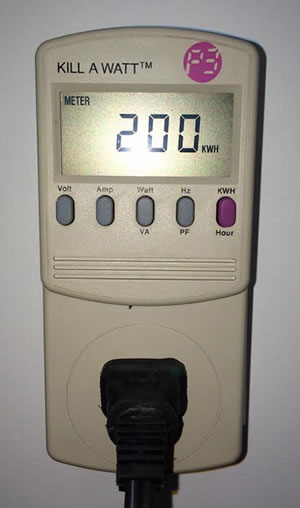 We used a P3 "Kill A Watt" to monitor the cost of electricity used by our tumblers. "The Kill A Watt" is a device that clocks how much electricity goes into the cord of your machine or appliance.

Will it Run Up My Electricity Bill?

We receive occasional questions from people who would like to know the electricity costs of running a rock tumbler. They usually ask a question something like this...

"So, I am going to run this rock tumbler continuously, 24 hours a day, seven days a week, for at least a month. How much is that going to run up my electricity bill?"


We understand why someone would ask this question. To answer it we purchased a "KILL A WATT" manufactured by P3 International. The "KILL A WATT" is a digital device that you plug into a wall outlet and then plug your rock tumbler (or any other appliance) into it. The "KILL A WATT" will then monitor how many kilowatts of electricity are consumed.

When running a tumbler, the amount of electricity consumed depends mainly upon these things...

2) How Long You Tumble: The longer your tumbler is plugged in, the more electricity you use.

Yes, It Can Be Pricey

Let's do a sample calculation...

Most of the tumblers that we sell (the Thumler's A-R1, A-R2, A-R6, and A-R12) have the same motor. That motor consumes almost exactly one kilowatt hour of electricity per day, running non-stop for 24 hours per day.

The average cost of electricity in the United States is about 10 cents per kilowatt hour. On average, electricity costs of running one of these tumblers in the United States is going to be about 10 cents per day or $3.00 per month. So, running one of these rock tumblers is going to take folding money out of your wallet every time you pay your electric bill.

This table summarizes the number of kilowatts used by some of the rock tumblers that we sell per day and per month. If you multiply these numbers by your average cost of electricity per kilowatt hour, the result will be the cost of running your tumbler per day or per month.

The chart above shows the average cost of electricity by state during calendar year 2018 according to the Energy Information Administration. There is a tremendous range of electricity costs. This is one time you are glad that you don't live in Hawaii !
If you want to estimate the average monthly cost of running one of the tumblers listed in the table above in your state, here is how you can do it. Find the number of kilowatts per month used by the tumbler from the table above. Multiply this number by the average electricity cost per kilowatt hour in your state from the accompanying table.

If you live in a state where the cost of electricity is spectacular, keep in mind that buying tumbled stones is often less expensive than running a tumbler.

If you want full information about rock tumbling costs, including electricity, grit, polish and rough, check out this article.