This is a small scoop from our media bucket. As you can see we have a range of different sizes of ceramic media. We believe that using a range of sizes of media works well for our needs. You probably also noticed some stones. These are small stones that have been through the tumbling process but did not pass our quality test. They work great as media and another trip through the process will improve their quality.
Ceramic media and plastic pellet media are used as a filler or as a cushioning agent in rock tumbling. This video shows how they work for the various applications in a rotary tumbler.

What Is Rock Tumbling Media?

Rock tumbling media is a rounded or cylindrical material added to the tumbler barrel to improve the results of your tumbling. It improves the tumbling action, facilitates abrasion on all surfaces of the stones, and helps to prevent chipped and bruised tumbled stones.

Most media used today is a kiln-fired ceramic that has a hardness of 7+ on the Mohs scale and an excellent tenacity. It is extremely durable, reusable, easy to clean, and will last through many batches of tumbled stones. We use ceramic media in all of our rotary and vibratory tumbling.

Plastic pellets were the most popular tumbling media of the past. They were used to cushion the stones and reduce bruising caused during tumbling. Today most people use ceramic media, but some have used plastic pellets for decades and still prefer them for rotary tumbling. (Plastic pellets are not suitable for vibratory tumblers). Ceramic cylinders can cushion just as well as plastic pellets. They are also hard and more effective at grinding and shaping stones.

1) Cushioning: To absorb impact energy between the stones in the barrel.

3) Filler: Get the barrel up to operating capacity.

5) Deliver Grit to All Rock Surfaces: Facilitates polishing and grinding. 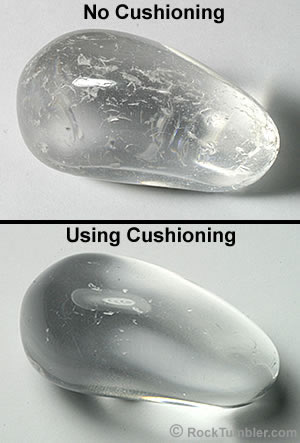 The two photos above are of the same piece of rock crystal.

The top image shows the piece after being tumbled without proper cushioning. The stone has numerous chips and bruises. This damage was cause by hard impacts with other stones in the barrel.

The bottom image shows it after being re-tumbled using ceramic media as cushioning. You can see how much less chipping and bruising are on the stone.

Have you ever tumbled a batch of rough only to open the barrel after the polishing step and notice little white fractures or chipping around the edges of your stones?

Those marks on the stone are called "bruises" and they are a result of the stones banging against one another in the tumbler with enough force to cause damage.


Most bruises result from two things: 1) a tumbler that is too fast for the durability of your stones (most tumblers are too fast for almost any type of stone except jasper, agate and other varieties of chalcedony), and, 2) large stones being banged against one another in the tumbler. Cushioning your stones will reduce, and in many cases, eliminate this problem.

How does media provide cushioning and stop your stones from bruising each other? Media in the barrel will keep the stones from hitting one another as often as they do when there is no media. The media will also slow down the stones and reduce the force they have on each other when they do come together.

The initial energy from his fall starts to be absorbed by the first balls his body touches. That energy is then transferred with less force to all of the balls that they touch. Then with even less force the energy is transferred to all of the balls that they touch. This continues until all of the energy has been absorbed through less and less forceful impacts between the balls. This energy absorption keeps the child from hitting the floor or if they do hit the floor it is with very little force. Using ceramic media in the barrel can have the same effect on the rocks in the barrel.

Materials that bruise or chip easily include: obsidian, glass and crystalline quartz. (Banded amethyst, rose quartz, rock crystal, aventurine, and tiger's eye are common varieties of crystalline quartz.) These materials can be chipped or bruised by impacting with one another in the barrel. Adding media for cushioning can reduce this damage.

Materials that cleave easily include: fluorite, topaz, moonstone, amazonite, labradorite and orthoclase. Many people avoid tumbling these materials because they are difficult to tumble with good results. Adding media for cushioning can solve that problem.

We use at least 50% media in the barrel to properly cushion fragile tumbling rough. Small ceramic media works best to cushion the material. We usually use a mix of large and small media for cushioning because it also helps with particle size balancing.

The top illustration shows how much empty space there can be in a barrel of large rough. It also shows there are not many contact points between the rough. Grinding and smoothing occurs when grit is caught between these points of contact. If you increase the number of contact points, more smoothing and grinding will occur.

What is particle size balancing? Particle size balancing is making sure that you have a range of different sized material in the barrel. If the rough in the barrel are all large pieces there won't be many points of rock to rock contact as they tumble. Grit does its job when it is caught between the stones and the media. The pressure of that contact enables the particles of grit to abrade and smooth the stones.

Imagine bowling balls in a box, there are only a few points where they touch each other. Now if you put some golf balls in that box you have significantly increased the number of contact points on the bowling balls and filled much of the empty space between them. Adding marbles would fill in even more of the empty spaces in the box and maximize the points of contact against the bowling balls. This shows how using a range of particle sizes in the barrel increases the number of contact points where the shaping and smoothing of the stone occurs.


Improve Tumbling Action in the Barrel:

If you have rough with lots of flat pieces (such as trim-saw slabs) or lots of very angular pieces, they might slide in the barrel instead of tumbling. Adding ceramic cylinders will help get those stones tumbling. Ceramic cylinders act like roller bearings in the tumbler barrel. They get between flat and angular pieces of rough and increase their motion. A mix of ceramic media sizes works best.

The most important use of ceramic media as filler is in replacing the volume of rock lost during the coarse and medium grit steps of the tumbling process.

During the coarse grit step between 10% and 30% of the rock volume in your barrel is lost to grinding. It is worn away and becomes the rock mud that you see in the barrel after tumbling a batch of rocks.

Less rock volume is lost during the medium grit step, but it is still important to add ceramic media to keep your barrel at the recommended tumbling level.

Replacement of rock volume with ceramic media is important in both rotary and vibratory tumblers. The ceramic media helps give your rocks a smoother ride during the fine grit and polishing steps. Without the addition of media, the rocks will receive a rougher ride that might cause chipping and bruising. 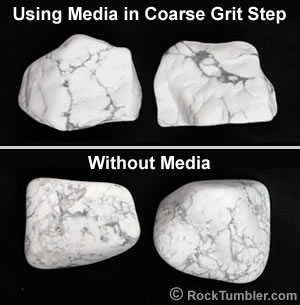 The photo above shows what happens to rough during the coarse grit step using different amounts of media. The two stones on top were tumbled for one week in a barrel that contained a little over 50% ceramic media. The stones on the bottom were tumbled in a barrel with all similar size rough and no media for one week. Notice the stones on the bottom are more rounded.
(In the past, we used to recommend the use of ceramic media during the coarse grit step of rotary tumbling if you did not have enough rough to fill the barrel up to its recommended operating capacity. We have found through testing that better-shaped stones are produced during the coarse grit step in a rotary tumbler when only about 10% of the load (by volume) is ceramic media. Too much media can prevent the stones from aggressively wearing away the points and edges of one another.

The only situations where we would use more than about 10% media during the coarse grit step of rotary tumbling are: (A) when we have a barrel full of large material with nothing filling the spaces between the rocks, then we might use up to about 20% media to improve the tumbling action; and, (B) when the rocks already have a nicely rounded shape and only surface smoothing is needed.) 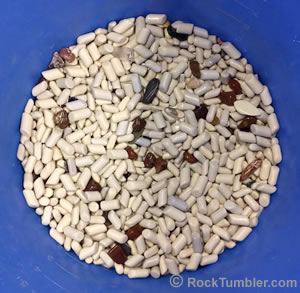 Here is a look into our media bucket. You can see a range of ceramic media sizes in the bucket as well as some small stones that have already been tumbled at least once. We scoop out of this bucket every time we start a new batch of stones.

How Long Will Ceramic Media Last?

Ceramic tumbler media has a hardness of about 7+. It is harder than almost all of the most commonly tumbled rocks such as agate and jasper. Small media will last a few tumbling cycles when used in all steps of the tumbling process. Large ceramic media will last much longer and eventually turn into small media.


How Do We Use Media?

We use between 10% and 50% ceramic cylinder media every time we run a tumbler. We believe that a mix of large and small media works best. Tiny tumbled stones also enter into our media plan.

If you do a lot of tumbling or simply want to save time, we suggest that you read Our Media Bucket article.

Brand-new media will have some surface roughness that remains after the manufacturing process. If you look closely at brand-new media, you will see roughness around the ends of the pieces. If you add brand-new media to a batch of rocks during the coarse or medium grit step, there is no need to worry about this roughness. It will be smoothed during your normal tumbling.

However, adding brand-new media to a batch of rocks at the beginning of the fine grit or polishing step might produce scratches on your stones. When adding media at this point in the process, it should be media that has been previously tumbled and all edge roughness removed. Preferably, it should be media that was polished in a previous batch of rocks. If you don't have that, simply run the media for a few days in medium grit, followed by a few days in fine grit, and it will be ready to use. 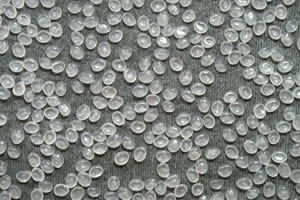 Plastic pellets are most often used to cushion stones during the fine grit and polish steps of the tumbling process.

Plastic pellets have a long history of use for cushioning in rotary tumblers and many people still use them. They are not recommended for use in vibratory tumblers.

We stopped using plastic pellets years ago after we tried ceramic media. We found that ceramic media are just as effective as plastic for cushioning. Here are a few other reasons why we switched to ceramic media for all of our tumbling.

Plastic pellets...
1) Are difficult to separate and gather after rinsing.
2) Are tough to get clean and dry before storing.
3) Cannot be reused in a finer grit stage because grit can imbed in them and contaminate the next steps.
4) Must be stored in separate containers according to the grit they were used in.
5) Do not help much with grinding because they are soft.


Not All Ceramic Media Works in Rock Tumbling