Save Time and Money with a Vibratory Tumbler 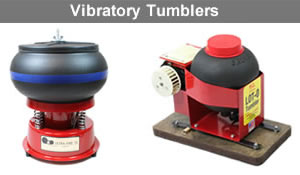 Rocks in a vibratory tumbler are shaken at a rate of at least 3000 vibrations per minute. That rapid action quickly smooths the rocks during the grinding steps. During the polishing step the rocks are buffed to a very bright finish using a tiny amount of polish.

Save Time, Grit, Polish and Electricity

Other important differences between vibratory and rotary tumblers are the action that occurs in the barrel and the shape of the stones produced. Rotary machines rely mainly on the tumbling action to shape the stones, but vibratory machines have an action that rapidly rubs the stones together. The result can be seen in the shapes of the finished stones. Tumbled stones produced in a rotary machine have a more rounded shape (see photos at bottom right).

Rotary and vibratory tumblers are very different. A rotary tumbler has a barrel that rotates about 30 to 50 times per minute. The stones tumble in the barrel and are worn round and smooth by particles of very hard grit that get caught between them as they tumble. This action slowly rounds the stones and slowly grinds their surfaces smooth.

A vibratory tumbler has a bowl that shakes at over 3000 vibrations per minute. That shaking causes the stones to rapidly slide back and forth on one another with pieces of grit caught between them, which grinds their surfaces smooth. A minor tumbling action also develops in the bowl. This very rapid shaking is much more efficient at smoothing the surface of the rocks than the tumbling action in a rotary tumbler. The result is a significant time savings.

How Much Time is Saved?

Most people who use a rotary tumbler run the stones for seven days in coarse grit, seven days in medium grit, seven days in a fine grit and seven days in a polish. Those who are picky about producing really nice stones run the coarse grit step two, three or four times depending upon the shape and hardness of the rocks being tumbled. The total time spent on this rotary procedure is between four and seven weeks. (We usually run our rocks in coarse grit for two or four weeks depending upon the material. Soft materials like opal, obsidian or glass run for a few days per step, while very hard materials like Brazilian agate or Ohio flint might spend four weeks in coarse grit and one week in the remaining three steps. We are probably pickier than most about producing nicely-rounded rocks.)

With a vibratory tumbler, you begin with medium grit and the surfaces of the stones are quickly worn smooth because of the very fast vibrations. Many people who use vibratory tumblers run the medium grit step for seven to ten days depending upon the shape and hardness of the material being tumbled. The fine grit and polishing steps are much shorter, requiring just two or three days per step to complete. The time savings is summarized in the chart at right.

How Much Grit and Polish are Saved?

In the typical rotary tumbler you use about two ounces of grit or polish for each pound of rocks in the barrel. In the vibratory tumbler just 1/2 ounce of grit (or less) is used per pound of rock. That is a savings of at least 25%! 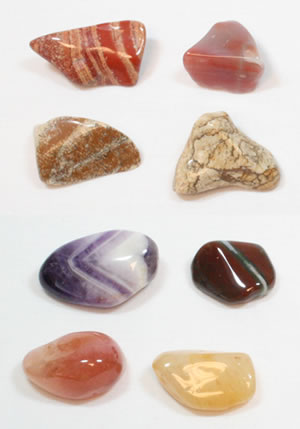