Home » Parts » How Long Should a Rock Tumbler Belt Last? 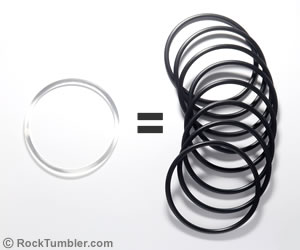 If you buy the right belts, they will last a long time on a quality tumbler that is kept clean and well-maintained. But, many belts are simply not up to the job.

We get an average of several years of use out of the clear belts supplied by Tru-Square Metal Products, the manufacturer of Thumler's Tumblers, when we use them on the clean and well-maintained Thumler's Tumblers running in our warehouse.

After hearing complaints about "Thumler's belts", we purchased some of the inexpensive black belts advertised for use on Thumler's Tumblers, and none of the ones we tested lasted very long. Most broke within a few weeks - or less. And, that left our tumbler barrel stationary on a machine with the motor running.

Yes, a real Thumler's belt costs more. But, from what we have seen, one clear belt can outlast a handful of some of the black belts being advertised for "Thumler's Tumblers" on large marketplace websites. How do we know? We bought some of those belts. Multiple times from multiple vendors. Every one that we tested broke within a few weeks.

How Long Do Our Belts Last?

We always have rock tumblers running in our warehouse. We know that a quality belt, on a quality tumbler that is kept clean and well maintained, can last for several years. That's the average mileage that we get from one of the clear belts sold on this website.

That's what we said.


If that surprises you, then we want to help you make your belts last longer - a lot longer.

There are two steps to getting a long life out of a tumbler belt. Here are the steps:


STEP 1: Get a Quality Belt

The first step is to purchase a quality belt. Above we said...


"a quality belt, on a quality tumbler that is kept clean and well maintained"

You must start with a quality belt. Because if you start with an inferior belt, all of the work that we are going to recommend in STEP 2 is wasted. A low-quality belt is likely to break and leave your barrel sitting motionless on the tumbler while the motor wastes electricity.

If you have a quality rotary rock tumbler such as a Thumler's Tumbler and you use their high-quality clear belts - then you should get two, three, or more years of service out of a belt. We use our tumblers regularly, and most of our belts last for several years. 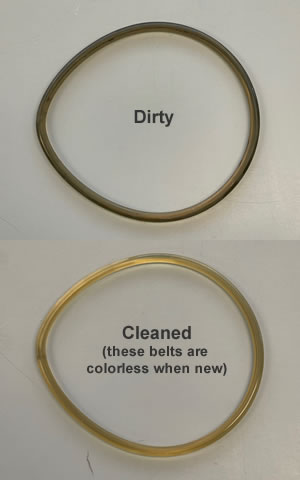 Keep your belt clean and free from oil and dirt. Oil will deteriorate your belt and cause it to slip. Dirt and grit will abrade your belt. We have been using this belt for a couple years. The top photo is before a periodic cleaning, the bottom photo is the clean belt. When brand new, these belts are clear (colorless).

Below we provide Five Maintenance Tips that will help you get a longer belt life. They are cleanliness and lubrication tips that will make your tumbler run smoothly - with less slip and less friction.


TIP 1: Oil and Grit Will Destroy Your Belt

The most important thing that you can do for your belt is to keep it clean. If you get even a little oil or a little grit on the belt, clean it immediately by following the instructions below.

Oil will cause your belt to deteriorate, and it will also cause the belt to slip on the pulleys. Grit will quickly abrade your belt and your pulleys. 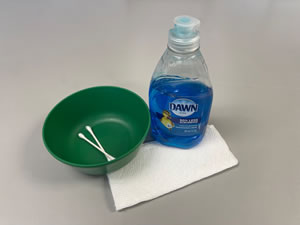 Ready to clean belts, pulleys, and bearings. We clean them with Dawn or Palmolive dishwashing detergent. We place a few drops in a small bowl and add a little hot water. We then place our belt in the soapy water and scrub it with a soft rag or paper towel. We clean the grooves in our motor pulley and drive shaft pulley with the Q-tips. We clean the insides of our bearings with a soapy Q-tip. When you get this stuff out, clean more than one tumbler.

Place your belt in a bowl of soapy warm water and wash it with a soft cloth. We use a few drops of Dawn or Palmolive dishwashing soap in about 1/2 cup of hot water.

We clean our belts any time we notice that they are dirty. If you have multiple tumblers, clean all of their belts while you have the bowl and soapy water ready.

IMPORTANT:   Do not clean your rock tumbler belt or bearings with gasoline, an oil & grease remover, or any chemical product. These can damage the belt or bearings of some tumblers. Use a few drops of mild dish detergent in a small bowl of water. Scrub these parts with a paper towel or soft cloth. 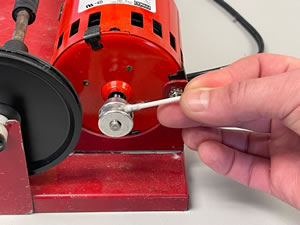 Scrub them with a Q-Tip dipped in a solution of water and mild dishwashing soap. Clean the motor pulley and the drive shaft pulley every time you clean your belt. If you don't clean them, then dirt on the pulley will immediately transfer onto your clean belt.

We clean our bearings after each 30 days of tumbler use, or after each batch of rocks. Wipe the excess oil and dirt from the outside of your tumbler's bearings with a soft dry cloth or a dry strip of paper towel. If they have accumulated a lot of dirt, clean them with a Q-tip and a soft rag soaked with a solution of mild dishwashing soap.

While you have the bearings off, this is the perfect time to clean the drive shaft and idler shaft of your tumbler. We do that last - after the bearings have been cleaned and our rag is still dirty.

After cleaning, lubricate each bearing with ONE drop of SAE 20 oil or ONE drop of household oil. Immediately after you apply the drop of oil, spin the bearing or turn the shaft several times to distribute the oil around the inside of the bearing. Wipe off any excess oil with a dry piece of cloth or a strip of dry paper towel. Bearings that are clean and properly lubricated will turn smoothly and reduce the amount of work that your belt and motor must do to drive the tumbler.

The maintenance tips above should help you avoid problems with any rotary rock tumbler.

Here are a few tips that can help you avoid and fix belt problems: Let's consider these one at a time below...

If the belt is too loose, you can remedy it by loosening the motor adjustment nut(s) and sliding the motor away from the motor pulley. When it is in the desired position, tighten the nut(s) to hold the motor in place. This will tighten the belt. See accompanying photos.

On most rotary tumblers, you can easily adjust the tension on the belt by loosening one or two motor mounting nuts (the nut(s) that attach the motor to the body of the tumbler), and moving the motor in the proper direction. To loosen the belt, slide the motor towards the motor pulley and tighten the nut to hold the motor in that position. See accompanying photos.

The belt should not be extremely tight. You can test the tension by pressing on the top of the belt with your finger. The belt should have a little "give" when you press lightly. Adjust the belt so that it is just tight enough to turn the drive shaft pulley without slipping under the load of a loaded tumbler barrel. 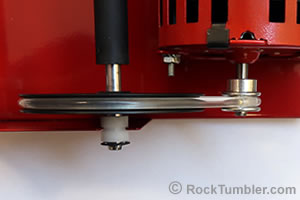 This photo is looking down on the machine, viewing the motor pulley and the drive shaft pulley. Notice how they are in perfect alignment and the belt is straight between them. If these pulleys are out of alignment, the belt will abrade against the sides of the pulley, increasing friction and causing belt wear.

While you are looking at the tension on the belt, look at the pulleys. On a Thumler's Tumbler there should be a silver metal pulley on the end of the motor shaft, and a black plastic pulley on the tumbler's drive shaft. When observed from above, these pulleys should be in perfect alignment when the tumbler is running with loaded barrel(s). See accompanying photo.

If the pulleys are not in perfect alignment, the belt will be subject to stress and abrasion. (A sign of belt abrasion is a belt wearing on one side, or tiny particles of belt on or under one or both of the pulleys.)

On a Thumler's Tumbler, you can adjust the alignment of the pulleys by moving the position of the metal pulley on the end of the motor shaft. There is a small allen bolt in a hole on the side of the metal pulley. You will need a tiny allen wrench that fits into the hex hole in the bolt. Turn it counter-clockwise to loosen, then slide the pulley to a position that will produce a good alignment, and then tighten the allen bolt.

Now turn the tumbler on and observe the new alignment from above with loaded barrel(s) on the tumbler. Modify your adjustment if needed. Other brands of tumblers usually have a similar pulley alignment adjustment. Check your instructions manual.

A rough spot on one of the pulleys can damage the belt. Signs of this problem are: particles of the belt below one or both pulleys, or excessive wear on one side of the belt.

You can usually find the rough spot by running your finger or a piece of cloth over the edges of the pulley and in the groove where the belt rides. If there is a sharp edge, you might feel it with your finger, or the piece of cloth might snag. Smooth any sharp spots with one or two strokes of a piece of silicon carbide sandpaper or an old nail file. 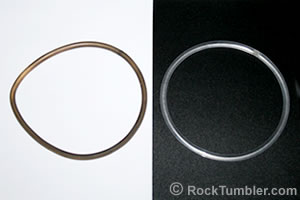 Pictured above is a belt that has sat stationary on a tumbler for years (left) and a brand-new belt (right).

We recommend buying a fresh belt from a busy rock tumbler dealer who sells a lot of them. Substitute belts designed for vacuum cleaners or other appliances rarely fit precisely or last very long. We receive new belts directly from the manufacturer or distributor every few months and rotate our stock.

It is never a bad idea to have an extra belt on hand. Every tumbler belt will eventually fail if it is used long enough. However, we don't advise purchasing six, eight or ten extra belts (unless you have six, eight or ten tumblers) because the belts could get old before you need them. One in reserve is usually a good number. Two is for those who remember the motto: "Be prepared." :-)

Overloading the tumbler barrel can cause a belt to slip, break, or wear. Overloading can happen when you fill the barrel too full. It can also happen if you are tumbling a material such as hematite that has a high specific gravity. When tumbling heavy materials, reduce the amount of rock in the barrel to stay within machine capacity.

If you are going to store a rock tumbler, pick a location where the temperature remains between about 50 and 75 degrees Fahrenheit (10 and 25 degrees Celsius). Belts, barrels, bearings, rollers and other tumbler parts made of rubber, plastic or similar material can be damaged by storage in higher or lower temperatures.

These exposures can make rubber and plastic parts stiff, brittle, and cracked. We often hear from people who had a rock tumbler stored in their attic where low and high temperatures occur repeatedly.

They often squeeze the tumbler barrel or bend the belt and see cracked rubber or plastic. They often start running one of these tumblers and notice that the barrel is leaking. That's how improper temperature exposure can ruin hundreds of dollars' worth of equipment.

A Goal for Tumbler Operators

Nobody enjoys checking their tumbler to find the motor running and a stationary barrel. Following the precautions above should make that a very rare experience for you.