The Uses Of Borax In Rock Tumbling

This article represents our opinion based upon lots of nonscientific testing. 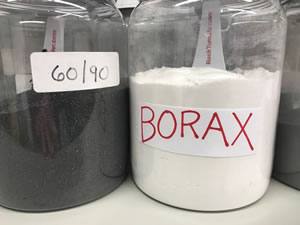 The two most common uses of borax in rock tumbling are: 1) as a burnishing soap, and, 2) as a soap used in a clean-up tumble between grit steps. We believe it is effective in these uses.

Lots of People Use Borax

Lots of people use borax in rock tumbling and say that it helps them produce better results. We are serious about producing nice tumbled stones, so, when we hear about a product or a method from many different sources, we usually check it out. We have multiple tumblers running here most of the time, so trying something a little different is easy.

We experimented with borax for many of the purposes that other people report. We found it to be effective in some of those purposes, but we have not been motivated to use it in our own tumbling.

ADVERTISEMENT
We summarize the results of our experiments below for anyone who is interested. We don't claim to have done "scientific testing". We simply experimented with borax in ways that others advocate, and we decided to stick with our favorite materials. 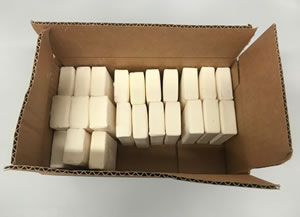 Grating Ivory Soap right out of the wrapper does not work very well. So, we unwrap a bunch of bars of Ivory Soap, place them in a cardboard box, fold over the flaps, place the box on a shelf, and forget about it. It grates wonderfully after drying for a few months.

We often burnish tumbling stones in soapy water after the polishing step because it can improve their luster. See our burnishing article for more information.

Our normal practice is to place our tumbled stones in a rotary tumbler barrel, add the normal amount of water, add about 1/2 tablespoon of grated Ivory bar soap per pound of material (rocks plus media), seal the barrel and tumble for thirty minutes to one hour. In vibratory tumblers we do the same but only use 1/4 tablespoon of grated soap per pound of material.

We were satisfied with the results and thought borax was effective. However, we prefer burnishing with grated Ivory bar soap because, in our experience, it produces equal or better results. 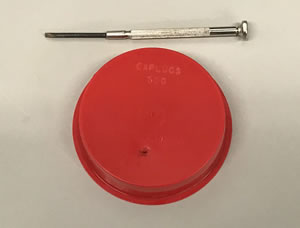 We poked a small hole in the cap of our Lot-o-Tumbler barrel with a small screwdriver. After punching this small hole, we never had another problem with gas popping the cap off - even while tumbling a full barrel of colored glass.

Some people recommend using borax or baking soda to prevent an accumulation of gas in the tumbler barrel when tumbling man-made or natural glass. These may be effective when small amounts of gas are produced.

When we tumble, if any amount of gas is anticipated, we prefer to control the gas using one of these methods:

C) using a tumbler with a very secure lid (such as the Thumler's Model B) and venting it very carefully each day.

Some people advocate adding borax to rotary and vibratory tumbler barrels during the coarse, medium, and fine grit steps. They believe that it facilitates the formation of a thick rock mud that will hold the grit close to the surface of the stones to increase abrasion.

We experimented with adding between 1/8 and 1/2 teaspoon of borax per pound of rough plus media in rotary tumblers and half of that amount in vibratory tumblers. We decided that tumbling without borax produces equivalent results.

We believe that when tumbling very durable materials (meaning those that will not produce a lot of rock mud during tumbling), increased abrasion can be produced by using a little less water or a little more grit.

Some people also advocate adding borax to the polishing step to produce a thicker polishing slurry. We suggest not using any additive that will come between the rocks and the polishing compound. If a thicker slurry is desired, we simply use a little less water or a little more polish.

At this stage of the process, we want as much polish as possible in contact with the stones, and only enough water to keep the stones in fluid motion. 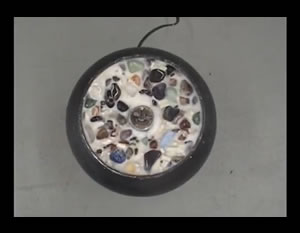 Many people put their rocks through a clean-up tumble between grit steps. They want to make sure that grit particles are removed from their rocks and from the barrel.

After each grit step, some people tumble their rocks in soapy water for 30 minutes to 24 hours. This is done to give the rocks and barrel a more thorough cleaning than can be done by rinsing in a sink or with a hose.

This step is a good idea if you are trying to produce stones with the highest possible luster. This step is usually done with the same soap used for burnishing, and for some people, that soap is borax.

We almost never do this step and are happy with the luster of our stones. However, if we were tumbling stones for a competition, for a special gift, or if we were going for the highest possible luster, then we would do this clean-up tumble between the fine grit and polishing step.

Be Careful. Borax Can Kill Your Lawn!

Although many plants require small amounts of boron for certain life processes, too much boron in the soil is toxic to many plants - including some types of grass. So, if you use borax (a mineral that contains boron) for burnishing, do not dispose of your burnishing water by tossing it on your lawn. It might kill your grass. (If you want more information about this, an article on the University of Minnesota website, explains how using borax as a lawn and garden weed killer can kill your grass. It is also illegal in some areas.)

Do We Use Borax?

No. We use grated Ivory Soap for any burnishing or clean-up tumbling. We do not think that borax is a bad idea, we just prefer Ivory Soap. We think that the thick soap suds cushion the stones and the soap produces a nice luster during burnishing.

We are glad to hear from anyone who disagrees with us, or anyone who has found good results using borax in their own tumbling. Please send your message to