Gas In the Rock Tumbler Barrel? 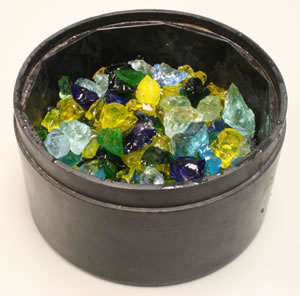 Some types of man-made and natural glasses can generate gas when tumbled. Keep an eye on barrel pressure when tumbling these materials - or you might be cleaning up a terrible mess!

One day I started my Lot-o-Tumbler with a load of landscape glass and it was running great. When I checked the tumbler the next morning, the lid had popped off and the slurry had evaporated to a thick mud. It was a mess to clean up but I didn't think too much about it. I assumed that I didn't have the lid firmly seated. So, I loaded the glass back into the barrel and started the tumbler again.

Later that day the lid was on the floor again! I was really surprised because I had intentionally placed the lid on firmly. It happened a third time, and that convinced me that the glass was producing enough gas to pop off the lid.

This problem was easily solved. I simply used an awl to poke a tiny hole in the lid of the Lot-o-Tumbler, and that allowed future gas to escape.

However, a build-up of gas in a rotary tumbler is a more difficult problem. If the lid pops off, the stones and tumbler mud will go all over your tumbler and all over the floor. We have cleaned up this type of mess. It is not a fun mess to clean up - and it can take most of your morning. 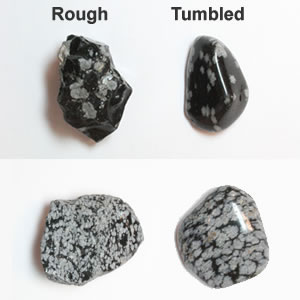 Natural glass such as obsidian and Apache tears can produce gas when tumbled.

Most of the rocks that people run in a tumbler do not make enough gas to cause a problem. However, we have encountered several materials that are likely to produce gas. We list them below to warn you.
The amount of time that a material spends in the barrel can also be important. Some people (including me) will often add a little extra grit and a little extra water and tumble a barrel of rocks for two or three weeks without opening it. In that situation, a rock that produces very little gas can have the extra time needed to build up enough pressure to unseat a lid.
ADVERTISEMENT 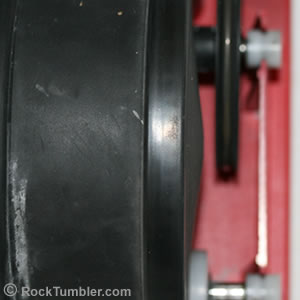 Check your tumbler barrel often if you are tumbling glass. In this image you can see that gas pressure is causing the bottom of the barrel to bulge out.

If you are running a rotary tumbler with a rubber barrel, you should always be checking your tumbler at least a couple times per day. When you do this, the three symptoms below strongly indicate that a build-up of gas is occurring in your barrel. If you see one, you might have gas. If you see two or three, it is almost certain that you have a build-up of gas in your tumbler barrel.


1) Inflation of the Barrel

A rubber tumbler barrel that is being inflated with gas will often have a bottom that is bulging outwards.

2) Mud Seeping Around the Edges of the Lid

A leaking of rock mud between the edges of the lid and the tumbler barrel can occur for many reasons. But, gas pressure in the barrel is one of the more common causes for this type of leak. If you see this, carefully check the bottom of the barrel to see if it is inflated.


3)Your Barrel Is Blowing Bubbles

If your barrel is seeping muddy bubbles around the edge of the lid, that tells you that the air pressure in the barrel is greater than the air pressure outside of the barrel. As the gas finds its way out of the barrel, it forces some water out in front of it - and causes the formation of bubbles as the gas escapes. These bubbles might form very slowly. You will probably not see a rapid escape of bubbles. Instead, you would expect to see bubbles slowly growing in one or two locations around the edge of the lid.

If you detect pressure inside, place the barrel in a plastic tub or in your laundry tub, or take it outside. Wearing eye protection is strongly advised - you don't want grit in your eye! Then, slowly and gently start opening the lid, with the opening area pointed away from you. It is unlikely that anything will spray from the barrel, but take this precaution just in case. Some people call this "burping the barrel". Some rock gas has an odor of sulfur or rotten eggs or a struck match.

Before restarting the tumbler, make sure that the rim and the lid are clean and no grit or rock particles are going to compromise the seal between them. 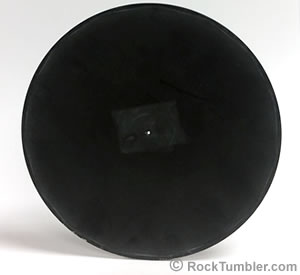 Shown here is a Thumler's 2-pound and 3-pound barrel lid with a small hole in the center. Cover the hole with tape during tumbling and use the hole to relieve any pressure that builds up.

A Pressure-Release Hole in a Thumler's Tumbler Barrel

To use the following method, we recommend purchasing an extra lid that will only be used when tumbling gas-producing materials.

We did not like burping the barrel as described above and were happy to learn of a simple gas-relief method from our friend, Steve Hart, the author of Modern Rock Tumbling.

Steve suggests drilling a very tiny hole in the center of the lid and covering the hole with a small piece of tape during tumbling. To relieve the gas pressure simply take the barrel off of the tumbler, and place it on a table with the lid facing up. Then gently peel back the tape.

If there is a build up of gas in the barrel, you might notice a hissing, bubbling, or an odor. Then clean the lid of the barrel, dry it thoroughly, and apply a new piece of tape. Place the barrel back on the machine and continue tumbling.

If you are tumbling a gas-producing rock, checking the tumbler frequently is important. Check no fewer than two or three times per day.

Some people say that they add a teaspoon of baking soda to their tumbler barrel to counteract gas. This probably works with some materials. However, we have not had 100% success with this method -- even when using a tablespoon of baking soda. So, instead of taking chances we use the methods described above.