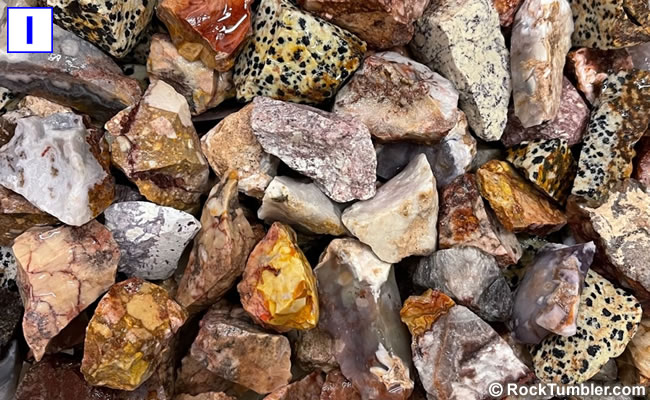 This photo shows a bag of Mexico Mix tumbling rough that was dumped into a colander and sprayed with water to reveal its full color. Click the image for a larger view. Most of the pieces range between 1/2" and 2" in size. You get a nice variety of igneous rocks, jasper, and agate.

Mexico Mix is an assortment of jasper, agate, and igneous rocks. It is a great material for making beautiful tumbled stones in your rock tumbler. The rocks in the mix were mined in Mexico - and thus the name "Mexico Mix".

This mix was prepared specifically for rock tumbling, and the pieces range between 1/2 inch and 2 inches in size (measured across their maximum dimension). They are intended for use in small rotary rock tumblers such as the Thumler's A-R1, A-R2 and MP-1 tumblers.

Every package of Mexico Mix is different, and the rock types that you receive will vary. In the descriptions below, we describe some of the rocks you are likely to find in a two-pound bag of this mix. You might not receive all of the rocks that are displayed. You might receive rocks that are not displayed. Each bag is different, and each is a random two pounds of rocks.

Please note: We are unable to make up special packages that contain specific sizes, specific rock types, etc. All packages are pre-made and contain a random two pounds of rocks. 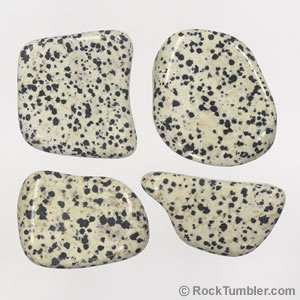 Dalmatian stone is an intrusive igneous rock that looks like the famous breed of white dog with black spots known as a "dalmatian." The black spots are composed of a variety of hornblende known as arfvedsonite. The white matrix is a mixture of albite (a plagioclase feldspar) and quartz.

Dalmatian stone has a Mohs hardness of about 6, so it shapes quickly in a rotary tumbler. Dalmatian stone usually polishes to a bright luster and is a stone commonly seen in the tumbled stone market. It is a stone with a novelty name and appearance that many people enjoy.

Dalmatian stone is composed mostly of feldspar minerals - which have a Mohs hardness of 6. It is a little softer than the jaspers and agates that are found in this mix. Some people might pick it out and tumble it separately because it will round faster and be ready for medium grit after only one week in coarse. Rhyolitic jasper has a similar hardness and it might be tumbled with dalmatian stone. 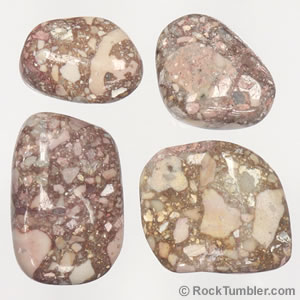 The volcanic breccia in Mexico Mix is a rock composed of small, angular pieces of tephra (volcanic ejecta) that have been cemented together with jasper. Often the tephra particles have been completely or partially silicified with jasper. 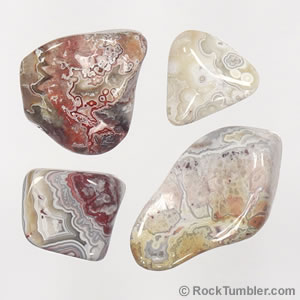 Crazy lace agate has been a favorite tumbling rough since the early days of rock tumbling (1950s and 1960s). It is called "crazy lace" because many pieces of this material possess an intricate banding that reminds the observer of a lace fabric.

Crazy lace is typically white or gray, but some pieces are decorated with a splash of bright colors. As an agate, Crazy Lace usually polishes to a bright luster. Pieces with a colorful lace pattern attract immediate attention. 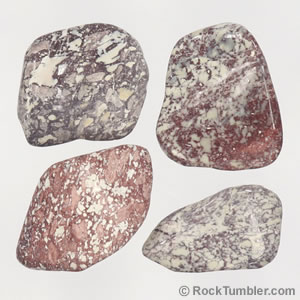 If the material is thoroughly cemented and the pore spaces are completely infilled, this type of rock can be an excellent tumbling rough. It can have an interesting appearance that makes beautiful tumbled stones.

Rhyolitic jasper is composed mostly of feldspar minerals - which have a Mohs hardness of 6. It is a little softer than the jaspers and agates that are found in this mix. Some people might pick it out and tumble it separately because it will round faster and be ready for medium grit after only one week in coarse. Dalmatian stone has a similar hardness and it might be tumbled with rhyolitic jasper. 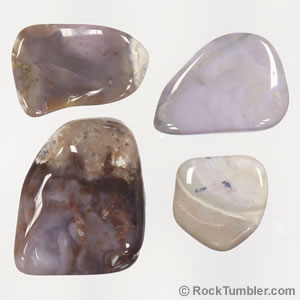 Tumbled Chalcedony: Translucent to semi-translucent pieces of jasper without banding.

A short lesson for those who are unfamiliar with chalcedony...

Microcrystalline silica is known by geologists and gemologists as "chalcedony". Chalcedony ranges in diaphaneity (transparency) from translucent to opaque.

Much chalcedony is neither opaque nor banded. So, what is this translucent, unbanded chalcedony called? It is simply called "chalcedony"... or if the person speaking wants to eliminate any confusion about it being mistaken for jasper or agate, the name common chalcedony can be used.

Read our full lesson about chalcedony, agate, and jasper.

We find a wide variety of "common chalcedony" in Mexico Mix. We sometimes find pieces that are translucent brown or translucent lavender - but translucent gray is the most abundant. 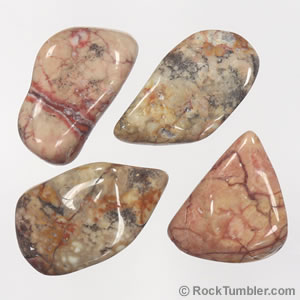 Common Jasper: Some colorful pieces of common jasper with a nice, shiny polish.

Mexico Mix also contains a variety of unnamed jaspers. These are mostly tan to pink to brown in color. They shape nicely and accept a bright polish.

Perhaps you are wondering about the terms "unnamed jaspers" and "common jaspers"? Whenever an occurrence or a deposit of jasper is first found, it does not have a name. The finder of that jasper might name it after its color or its markings - that's where names like red jasper, brecciated jasper and orbicular jasper come from. The name might be after a nearby geographic feature such as mookaite (after Mooka Creek, a stream in Western Australia). There are no rules - if you find a deposit of jasper, you can name it whatever you want.

Other jaspers get their names when people present them for sale. Then, names like picture jasper, fancy jasper, bloodstone, etc. might be used. But, some jaspers that are unremarkable or simply available in small quantities, might never be given a name - and that's when terms like "unnamed jasper" and "common jasper" are used. They can still be pretty, or interesting, or colorful, but they have simply not been given a name.
Customers also bought...

Large ceramic pellets work great as a filler and for delivering grit or polish to difficult-to-reach surfaces. More information...

1 pound of each: coarse, medium and fine grit. 8 ounces of TXP polish. This is enough supplies to tumble up to four three-pound barrels of rocks. Save money with a large grit kit.