Home » Supplies » Polish » What polish should I use for rock tumbling?

What Polish Should I Use for Rock Tumbling?

Popular rock tumbler polishes include tin oxide, tripoli, aluminum oxide and cerium oxide. These are all micron-size powders that work well at polishing many types of rock.

There Are Many Types of Polish

Rock tumblers have been popular since the 1950's and in that time many different polishing compounds have been successfully used. Some are sold in a variety of grades. Some are very expensive. Only a few good ones sell at a reasonable price. The most popular polishes include:

How to Start a Rockhound Debate :)

Most people who have done a lot of rock tumbling have experimented with a number of different polishes and have their personal favorite(s). If you go to a gathering of rockhounds and ask them what polish is "the best" for rock tumbling you will certainly start a debate and maybe an argument!

People who have used a polish for a number of years will be dedicated to it and think that it is the best. Other people have done lots of experimenting and have found that multiple polishes will do a great job on a particular type of rock. The difference is often in the procedure rather than in the material used to produce the polish.

We Use Aluminum Oxide Polish

We have found that aluminum oxide is an excellent polish for almost any variety of agate, jasper or quartz. The TXP polish that we sell is a micron aluminum oxide (sometimes referred to as "alumina"). It is easy to use and the results are reliable. The best part is aluminum oxide is a very inexpensive polish. We use it almost 100% of the time when we tumble.

We use TXP polish it in rotary tumblers and it has produced a great luster on almost every material we have tumbled. Our procedure is to tumble for one to three weeks in coarse (60/90) grit until the rocks have a nice rounded shape. We then follow with one week in medium (150/220) grit and one week in fine (500F) grit. We then polish for one week in TXP polish.

We also use TXP polish in the Lot-O-Tumbler, vibratory machine and all of the Thumler's vibratory tumblers. Vibratory is our favorite method of polishing because it is fast and regularly produces some of the highest polishes that we have achieved.

Our procedure is to tumble the rocks from one to three weeks with coarse (60/90) grit in a rotary tumbler. We then use a vibratory tumbler with medium (150/220) grit for 48 hours, fine (500F) grit for 48 hours and polish with TXP for 36 to 72 hours. We check the rocks frequently and stop polishing as soon as we are happy with the luster.

Cerium oxide is the second polish that was extremely popular before aluminum oxide started winning market share. It is a yellowish to orangy polish that does a great job on varieties of agate, jasper, and quartz. It also produces a great polish on petrified wood, coral, obsidian and man-made glasses - including goldstone. Many people prefer cerium for tumbling feldspar materials such as moonstone, labradorite, sunstone and amazonite. 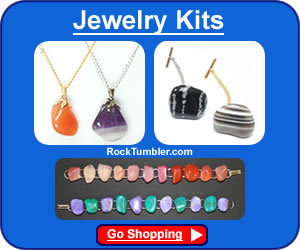 Chromium oxide, also known as chrome oxide, is a bright green polish that generally works well on very tough or very hard materials such as jade, tourmaline and garnet. It is also used on rocks composed of multiple minerals such as lapis lazuli, rhodonite and unakite.

Tripoli is a very inexpensive polish. It is a residual material produced by the weathering of certain siliceous limestones. It consists of diatoms, radiolarians and other siliceous materials. It is most often used in tumbling when a low-quality finish is acceptable or as a prepolish step after grinding in silicon carbide.

We don't use tripoli in our rock tumbling because it only has a hardness of about seven. However, we have used it many times in woodworking. After a first coat of varnish is applied and dried thoroughly, we buff the surface with a small amount of tripoli on a soft rag. This smooths the surface of the varnish.

Agates and jaspers are usually very easy to polish with inexpensive TXP aluminum oxide. Beginners can be successful with almost any variety of these materials if the rock tumbling instructions are carefully followed and the rocks, barrel and lid are thoroughly cleaned between steps. Lake Superior Agate and picture jasper are two of our favorites.

Tin Oxide and cerium were two extremely popular polishes for rock tumbling before aluminum oxide started winning market share. It is a white polish that does a great job on all varieties of quartz, jasper and agate. It works exceptionally well on volcanic glass such as obsidian and on man-made glasses.

Many people also use tin oxide when polishing soft materials such as calcite, rhodochrosite and malachite. Tin oxide is not widely used today because it currently costs about three to four times as much as a good aluminum oxide - such as TXP.

Titanium Oxide is a rock tumbler polish that works well on a variety of materials. It isn't prohibitively expensive. We have found it to produce an acceptable polish but we prefer the results we get with aluminum oxide polishes such as TXP. However, we have a few customers who use a lot of titanium it and are very happy with their results.

We recommend these sources of rock polishing compounds for your rock tumbling needs...