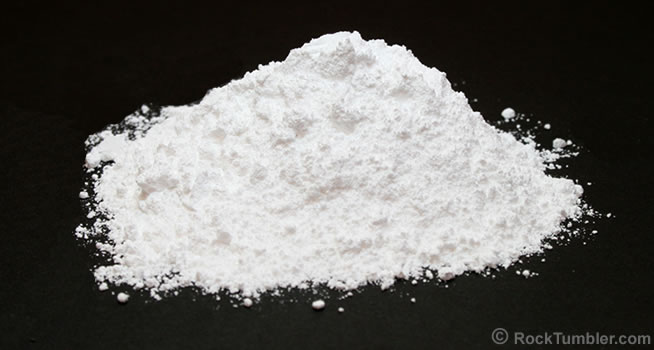 We use TXP aluminum oxide polish in almost all of our rotary and vibratory polishing. It works great and is a lot less expensive than many other polishes.
ADVERTISEMENT

What Is Aluminum Oxide Polish?

Aluminum oxide has become the most popular polish for rock tumbling and most lapidary activities. Why? Two reasons:

1) aluminum oxide does a fantastic job at polishing agate, jasper, quartz, petrified wood and most of the other materials that are polished in a rock tumbler; and,

2) aluminum oxide polishes are inexpensive - they cost less than half as much as cerium and tin oxide - the other all-time favorite polishes.

Aluminum oxide has a chemical composition of Al2O3 - the same as corundum (the mineral of ruby and sapphire). It also has a Mohs hardness of 9.

We sell two different aluminum oxide polishes: TXP and #61 Rapid Polish. The difference between them is their particle size. We explain these two polishes in the article below. 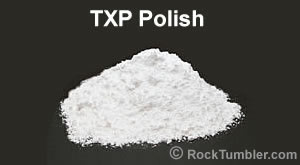 What is TXP Polish?

TXP is our best-selling rock tumbler polish, and it is the polish that we use in almost all of our rock tumbling. We use it in rotary tumblers and vibratory tumblers. We use it for these reasons: 1) performance; 2) price; and, 3) particle size.

Even though "TXP" means "the experimental polish" it has proven itself as a lapidary polish over decades of use. It is an aluminum oxide powder with a particle size distribution that centers around 3 microns. It makes a great lapidary polish and produces a bright shine on almost any (polish-worthy and well-prepared) rock, mineral, or glass with a hardness between 5 and 8 on the Mohs hardness scale.

We use TXP for its superior polishing abilities, but we also use it because of its particle size. That 3-micron size is large enough to keep it out of most of the tiny fractures and cleavage planes that exist in many tumbling roughs. We don't like to spend time trying to extract polish out of fractures. Sometimes it is impossible to remove. 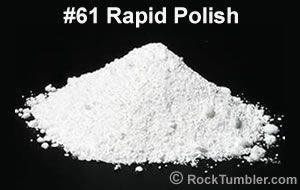 Our second-best-selling lapidary polish is #61 Rapid Polish. It has a particle size distribution that centers around 0.3 microns. It will work in a rotary tumbler but is primarily intended for use in a vibratory tumbler.

That tiny particle size allows it to produce a brighter shine than TXP on some materials. Many people use a 1000 grit step before using Rapid Polish, but we get great results going straight from 500 or 600 grit to Rapid Polish.

How Much To Use? We use #61 Rapid Polish in our Thumler's UltraVibe UV-10. We also use it in our Lot-o-Tumbler. In these tumblers we add 1/2 level tablespoon per pound of rock (or per pound of rock + media). We sometimes add a little more than 1/2 tablespoon when tumbling brittle materials such as obsidian, glass, mookaite, topaz, etc. in vibratory. The goal is to make a thicker slurry that will cushion the rocks and produce a bit of adhesion between them.

Some History: #61 Rapid Polish was developed for polishing jade (a very tough stone to polish) in a vibratory tumbler. Rapid Polish worked so well on jade that the developers tried it on other types of rock and were thrilled with the results.

When Do We Use Rapid Polish? We use #61 Rapid Polish if we are tumbling fracture-free materials without cleavage planes in a vibratory tumbler. We do not use it on material with fractures or cleavage planes because the small particle size of the polish allows it to enter fracture planes and cleavage separations. (Examples: We would not use #61 Rapid Polish when tumbling feldspars, such as labradorite, moonstone, etc. We also would not use it on a transparent to translucent agate if there are any signs of internal fractures - if the polish gets into a fracture, it will be clearly visible through the transparent to translucent material.)

Apache Tears, Obsidian and Glass: We have polished a lot of Apache Tears and other varieties of obsidian with #61 Rapid Polish, and it does a great job. We also recommend it for polishing man-made glasses in a vibratory tumbler.

Polishing Cabochons: Our favorite use of #61 Rapid Polish is polishing cabochons (of fracture-free material) on an aluminum lap covered with a felt pad of about 1/2 inch thick. #61 Rapid Polish produces a super-bright shine.

We start with a dry felt pad and moisten it with a few mistings of water from a spray bottle. We brush the surface of the felt with a clean paint brush between mistings for force the water into the felt. We then turn on the machine and allow it to run for a minute or two to sling the excess water off. We then stop the machine and brush on a light coat of Rapid Polish slurry, then, without redipping the brush, we stroke the brush lightly across the surface of the pad in multiple directions to force the slurry into the felt's porosity.

We then restart the machine and gently press the dome of a dopped cab into the felt, rotating the dop stick and rocking into different angles to put all parts of the cab's surface in contact with the felt. We take care that the cab does not overheat and mist the lap with water often. Wow! You can produce a bright shine!

Preparation for polishing:   Most people go straight from fine grit (500 or 600 grit) to TXP. Some people who use #61 Rapid Polish do an additional step with 1000 grit. We don't use 1000 grit in our everyday polishing, but if we were tumbling for a special project we might use it.

TXP in Rotary   We run TXP for one week in a rotary tumbler. That is usually enough to develop a polish on materials with a Mohs Hardness of 7 or less. For harder materials, more time might be required.

#61 in Vibratory   When using TXP or #61 Rapid Polish in a vibratory tumbler, we run for 48 hours, check the polish, and continue if we think it can be improved. Most of the time we polish in these aluminum oxide compounds for 48 to 72 hours. We rarely go beyond 48 hours - except when polishing materials harder than Mohs 7. Those, such as topaz or beryl, can require 50% more polishing time because of their greater hardness.

Don't Overpolish   We find that too much time in the polishing step can be counterproductive. Longer polishing times can liberate inclusions from the rough or allow stray grit particles to produce scratches. Long tumbling times can also result in the accumulation of tiny bruises or abrasions.

If our rocks don't have a nice luster after the polishing step, we might try burnishing them. This can sometimes improve their luster in an hour or less.