One of the Original Rock Tumbler Polishes 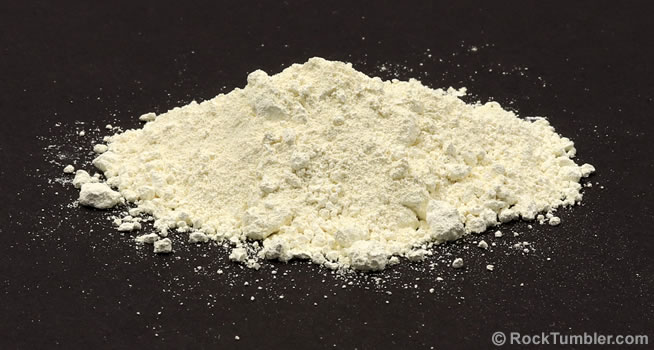 We are selling optical-grade cerium oxide polish. It is a lapidary polish that is used for most rocks and minerals that have a Mohs hardness between 5 and 8. It is also used as a polish for natural and man-made glass of all kinds. A note about the color shown above.

What Is Cerium Oxide Polish?

Cerium oxide was one of the first polishes to be widely used in rock tumbling. It is the "polish of choice" for many people who do rock tumbling and all types of lapidary work. Cerium oxide produces a bright polish on agate, jasper, quartz, petrified wood, obsidian, feldspar minerals and just about every rock, mineral, and glass that is processed in a rock tumbler.

Cerium is a chemical element, and in combination with oxygen, it is known as "cerium oxide" with a chemical composition of CeO. It works best on materials that have a Mohs Hardness between 5 and 8.

How much to use?


Preparing for the Polish

Most quality tumbling roughs that have been run through a fine grit step (500 or 600 grit silicon carbide) are ready for polishing. When we use cerium polish in a tumbler, we go straight from the fine grit step to polishing.


How long to polish?

In a rotary tumbler, most materials will tumble to a bright polish with cerium oxide in about seven days. The exception is materials with a Mohs hardness greater than seven, such as topaz, beryl, or tourmaline, which might require an extra two days or more to attain a fully developed polish.

In a vibratory tumbler, most materials with a Mohs hardness of seven or less require just two days to achieve a bright polish (Mohs eight can require three to four days). Start inspecting the polish at the end of 24 to 36 hours, and stop when the polish is bright. Polishing for extended amounts of time generally does not improve the polish - instead it subjects the rocks to bruising.

Other Uses of Cerium Oxide:

Cerium oxide is an all-purpose lapidary polish that can be used on wheels and flat laps covered with leather, felt, canvas, or other popular coverings. A slurry of cerium oxide and water is applied to the wheel or lap and kept wet during the polish by spritzing with water from a spray bottle.

In his book titled "Modern Rock Tumbling," Steve Hart shares that cerium oxide is his "first choice" for most of the harder rocks that he tumbles in a rotary tumbler. He encourages people to try cerium oxide in their vibratory tumbling.

In the 1960s and 1970s cerium oxide was inexpensive, and that is when it reached its peak of use in rock tumbling and other lapidary activities.

Today cerium oxide has a lot of competing uses, which have increased demand. The price has skyrocketed! Because of cerium oxide's high cost, many people now use an aluminum oxide polish such as TXP or #61 Rapid Polish. They usually produce fantastic results and are much less expensive.

My Experience With Cerium Oxide

Cerium oxide was my favorite lapidary polish from the 1960s until about 2010. It worked so well that I never thought I would ever use any other polish. I used it in rock tumbling, cabochon cutting, and flat lapping.

The only exception is if I have material with fine fractures, #61 Rapid Polish is small enough to get into them, leaving a white line on the stone from accumulation in the fracture. I've learned to use TXP for these materials because it has a larger granule size (TXP's particle size distribution is centered on about 3 microns, while #61 is centered at about 0.3 microns).


Many Grades of Cerium Oxide Polish

Cerium oxide comes in a wide number of grades. We sell a grade that is appropriate for polishing rocks, minerals, and glass in a rock tumbler. The same grade is used by many people for polishing light scratches out of window glass or auto glass.

Cerium oxide is also made in top-quality grades that are used for polishing high-quality lenses, prisms, and telescope lenses. These are extremely expensive. You don't have to buy the most expensive grade for use in a rock tumbler.


A Note About the Color of Cerium Oxide Polish

Pure cerium oxide polish is usually white in color. As the purity declines the color departs from white - often to yellow, then to orangy or pinkish.

If you are a regular buyer of our cerium, you will probably notice that the cerium in the photo at the top of this page is a yellowish material instead of the orangy cerium that we were selling up until early 2021. This cerium is from a different source. It is yellowish instead of orangy because of its higher purity. (This material is 90% pure cerium oxide. The previous material was 60% cerium oxide). We tested this new polish and found that it produces a polish luster that is just as good - if not better - than the previous cerium sold here. Fortunately, the price is about the same.