One of the greatest tumbling roughs of all time. 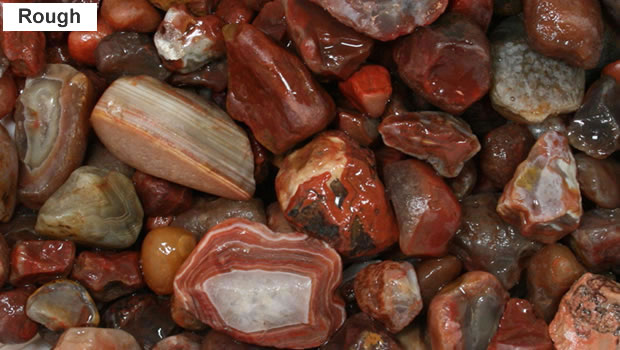 This is a photograph of our Lake Superior Agate rough. This material consists of agate nodules and pieces between 1/4" and 1" in diameter. Lots of red, white, gray, orange, brown and crystal color material with nice banding and occasional eyes. The rough in the photo above is wet to show full color.

Lake Superior Agate is widely known as a tumbling rough. It is so popular in the Great Lakes area that the Minnesota legislature designated it as the official "state gemstone".

Lake Superior Agate is typically a banded material - often concentric - but sometimes has eyes and mossy patterns. The red, yellow, orange and brown colors are a result of an iron pigment within the agate material.

Our Lake Superior Agate mix consists of small nodules and nodule fragments found in the Great Lakes area. It is a tough, dense material in pieces that range from approximately 1/4" (6 mm) to 1" (25 mm) in size. It takes a great polish. We use TXP polish - an aluminum oxide compound - when we polish Lake Superior Agate. 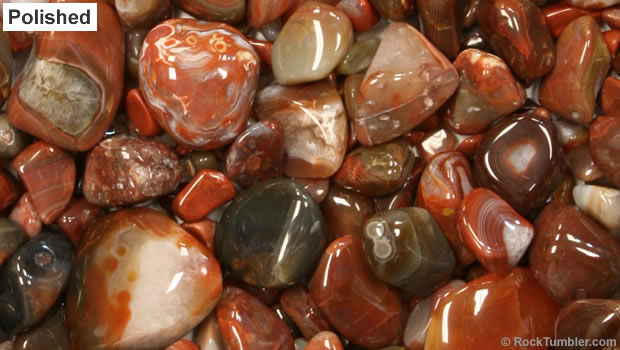 A photo of some Lake Superior Agate nodules that we polished. They show the orangy red, to reddish brown colors that this material is best known for. You can also see the banding, eyes, and crystal quartz centers.

This peek into our media bucket shows a few pieces of Lake Superior Agate (and a few other tumbled stones) that will serve as media the next time we tumble. Using rough or tumbled stones that could be improved is like getting the use of fine media for free.

Truth be told, we believe that Lake Superior Agate can serve as an excellent rock tumbling media. It has a nice rounded shape and is, in our opinion, harder than the tumbling media that we sell. It also costs about the same as good tumbling media. So, when we need filler, we toss a couple of pounds of agate nodules into the tumbler instead of large ceramic media.

After the polishing step we recover some really nice polished agates from our media bucket. Any agates that are less than "excellent" are allowed to run through the cycle again and the deeper material removal improves some of them to "excellent."

It's like getting free media and some beautifully polished agates as a bonus. We probably shouldn't tell this little secret because it will probably trigger a demand for more Lake Superior Agate than we can obtain!

When tumbling this Lake Superior agate a couple of things to consider are:

1) More Time: Yes this is an agate and it is sized nicely for tumbling, however it will require more time in coarse grit than the EASY tumbling roughs. Why? It is extremely hard. It does not seem to wear down as fast as other agates in a rock tumbler. We usually run it up to four weeks in coarse grit before moving on to medium grit. We usually tumble it for four weeks straight, but you might want to tumble for two weeks, clean it up, then decide if you want to run it for one or two additional weeks in coarse grit. When you are happy with the smoothness, move on to medium grit.

2) Media Needed: We usually tumble Lake Superior agate without ceramic media. It doesn't need media because many of the pieces have a rounded shape. It produces a good tumbling action in the barrel on its own. In fact, we use Lake Superior agate as a "natural media". We often toss a few handfuls of Lake Superior agate into a tumbler barrel of large rough and run it instead of ceramic media. This agate costs about the same as good media, so we use it as a substitute and grab a few nice agates out at the end of the each polishing step. It's so hard that it lasts longer than the media and the nice tumbled stones are a bonus. :-)

Coarse Grit Step: Fill your tumbler barrel about 2/3 full of Lake Superior agate rough. Then add 2 tablespoons of coarse (60/90) grit per pound of material in the barrel. Add enough water to cover the tops of the agate. Run the material in coarse grit for at least 2 weeks. After two weeks check your material. If you are happy with the shaping and smoothness move onto the medium grit. If more shaping is desired, clean the rough and start tumbling again with a clean barrel and fresh grit. If you are lazy, like we are, simply run this material for one month straight without a two week check and clean up. If you plan on running for four weeks straight you should add about 20% more grit and a little extra water.

At the end of all steps in the rock tumbling process, make sure to thoroughly clean your rocks and barrel to reduce the chance of coarser grit contaminating the finer grit steps. This cleaning is especially important before you begin the polishing step.


Medium Grit Step: Put your cleaned rough back into the barrel. If the barrel isn't at 2/3 full, add a little media to bring it up to operating capacity. Then add 2 tablespoons of medium (150/220) grit per pound of material in the barrel. Add water until it is just below the top of the rocks. Tumble for one week.

Barrel slurry dumped down the drain will harden like concrete.
Fine Grit Step: After clean-up, put the rocks back into the barrel using 2 tablespoons of fine grit (500F) per pound of material. Again add water to just a little below the top of the rocks. Tumble for one week. The rocks should now be smooth and possibly starting to get a slight luster.

Polish Step: IMPORTANT: Make sure that your barrel and rough have been cleaned thoroughly. Any grit carried over from a previous step will likely ruin your polish. Place the rough in the barrel with two tablespoons of TXP polish for each pound of material in the barrel. Add enough water to almost cover the rocks and let it tumble for one week. You should have polished rocks at the end of this step.

Burnish If Needed: This material usually takes a great polish. However, burnishing it after the polish step can often improve the look of the stones. If you would like to try burnishing, full instructions can be found here.

Coarse Grit (60/90 Mesh):
Coarse grit is not used in a vibrating rock tumbler.

Medium Grit (150/220 Mesh):
Due to the size of this material it is recommended that you begin with a minimum of 30% ceramic media. The use of this media will aid in the tumbling action in the barrel and help deliver grit to all surfaces of the rough

After you have your bowl loaded to the manufacturer's recommended level add 1 tablespoon of grit for every two pounds of material, including the media, in the bowl. While the tumbler is running, slowly add water until the material has a thin coat of wet grit and the tumbling action is smooth and fast in the bowl.

Check the bowl every 8-12 hours to ensure the action is still good. If the action has slowed, add water a little at a time until the action is back to normal. If the mud gets too thick you will need to do a complete rinse of the material and bowl. After rinsing, add fresh grit and water and start tumbling again. You are done with medium grit when you are satisfied with the shape and smoothness of the stones. Usually 4-7 days for us with this material. Give the material and bowl a thorough cleaning before moving on to fine grit.

Fine Grit (500F Mesh):
Place your material back in the tumbler bowl, then add enough polished ceramic media to bring the load up to the manufacturer's recommended operating level. Add one tablespoon of grit for every two pounds of material in the bowl. Then, turn the tumbler on and slowly add water until the material has a thin coat of wet grit and the tumbling action is smooth and fast in the bowl.

Open the bowl every 8-12 hours to check the action is still good. We usually run fine grit for 48 hours. Thoroughly clean the bowl and material before moving to the polishing step.

Polish (#61 Rapid Polish or TXP):
Place the cleaned material back in the bowl. If needed, add ceramic media that has been previously polished, to bring the bowl up to the manufacturer's recommended operating level. Add one tablespoon of polish for every two pounds of material in the bowl. Turn on the tumbler and slowly add water. Stop adding water when the material has a thin coat of wet polish and the tumbling action is smooth and rapid.

Like the previous grit steps, open the bowl every 8-12 hours to check the tumbling action. Add water if it has slowed. We have found that 48 hours is usually all the time you need to get a good polish in a vibratory tumbler. Any more time than that and you run the risk of damaging / bruising the material.

Burnish If Needed:
This rough will usually take a great polish. However, burnishing this material after the polish step can often improve the look of the finished stones. If you would like to try burnishing to see if it improves the look of your polished stones, full burnishing instructions can be found here.
Customers also bought...

Large ceramic pellets work great as a filler and for delivering grit or polish to difficult-to-reach surfaces. More information...

1 pound of each: coarse, medium and fine grit. 8 ounces of TXP polish. This is enough supplies to tumble up to four three-pound barrels of rocks. Save money with a large grit kit.