Map showing the five regions of the United States where we ship lots of rock tumblers.
We have been selling rock tumblers for a few years and ship lots of them to Alaska, the Northwest, New England, the Great Lakes Region and the Southwest. The residents of states in these regions purchase more rock tumblers per capita than the national average.

We have some ideas why tumblers are so popular with the people who live in these areas and share them below.

We are unofficially naming Alaska the "Rockhound State" because the people of Alaska have purchased more tumblers per million residents than any other state in the nation. No other state is even close. The people of Alaska have purchased eight times more rock tumblers per million residents than the average state and three times more tumblers than the residents of Montana, the second-place state.

What's going on up there? Why do Alaskans purchase so many tumblers?

There are probably several factors to consider but we believe that Alaska is a state where: A) there are lots of nice rocks to tumble; B) people spend a lot of time outdoors where they can find inspiring rocks; and, 3) buying a rock tumbler online is probably more convenient for many people in Alaska than traveling to the nearest rock shop.

Here's what USGS has to say about the many types of chalcedony found in Alaska...

"The State has several varieties of chalcedony found at different locations, including agates, jaspers, and petrified wood. [...] Agates, jasper, and petrified wood can be found on many beaches, including those on the islands of Adak, Admiralty, Attu, Kuiu, Kupreanof, Nelson, Popof, Tanaga, Unalaska, and Zarembo. These same materials can be found in the gravels or in many of the streams and rivers of the State. Other well known sources are the outlet of Becharof Lake, Little Nelchina River, and Caribou Creek. Read more at the USGS website.

The Bureau of Mines website has information about recreational rockhounding in Alaska and mineral collecting in the Dalton Highway area. 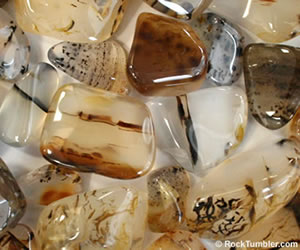 Montana Moss Agate is a favorite tumbling rough in the Northwest. It is a transparent to translucent chalcedony with a clear, white, gray or amber base color with dark brown to dark black dendrites. 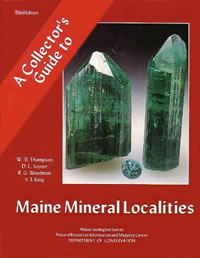 The second-place region for purchasing rock tumblers is the Northwest. This region includes: Washington, Oregon, Idaho, Montana and Wyoming. People in this area purchased 2 to 3 times the number of tumblers as the national average. Like Alaska, these states have lots of nice rocks; the people who live there like the out-of-doors; and, shopping online for a rock tumbler is probably very convenient.

Great agates, jasper, and petrified wood are often found in areas of ancient volcanic activity. Agates form in cavities within solidified lava flows, petrified wood can form when a forest is buried beneath an ashfall, and jasper forms where there is highly mineralized ground water. The long history of volcanic activity in the Northwest makes the area a place where lots of interesting tumbling roughs can be found - petrified woods, beach agates and the popular Montana Moss Agate.

A few interesting websites that feature rocks of the Northwest include: Agates of the Oregon Coast, Sticks in Stones (a petrified wood site) and photos of Montana Dryhead Agate. Check them out!

New England is the third region where we ship a lot of tumblers relative to the number of residents. Although Connecticut, Maine, Massachusetts, New Hampshire, Rhode Island and Vermont are tiny states, the residents of these states buy a larger number of tumblers from us per capita than the national average. People in New England enjoy rocks. 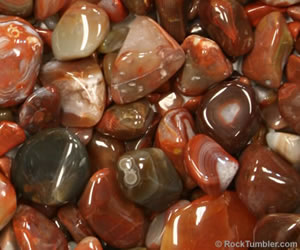 Glaciers scattered red to brown agate nodules known as "Lake Superior Agates" throughout the Great Lakes Region. You can learn a lot about them at the Gitche Gumee Agate and History Museum.

The Great Lakes region is the home of one of the best known tumbling materials in the world - Lake Superior Agates. These red, brown, orange, gray and white beauties receive their color from iron and have some of the most interesting eyes and banding in the agate family.

Lake Superior Agate nodules formed in cavities of basalt and were excavated by glaciers during the Great Ice Age. They are a lot more resistant to chemical and physical weathering than basalt, so they remained behind after the basalt weathered away. The glaciers carried the agates southward from their place of formation and dropped them in the sand and gravel deposits that blanket the surface of the Great Lakes Region. Now they are frequently found along beaches, in stream sediments and in sand and gravel quarries. 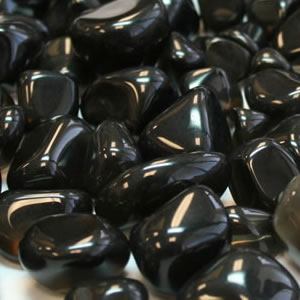 We thought that we would ship a fantastic number of tumblers to the southwest because the area is famous for agates, jasper, petrified wood and a variety of other tumbling materials. Much of the area has a dry climate and sparse vegetation. This leaves rocks and potential tumbling materials exposed at the surface where they can be discovered in dry washes and on alluvial fans.

People in southwestern states purchase more tumblers from us than the national average; however, not nearly as many as we expected. This is probably because there are a lot of great rock shops in the southwest where rockhounds can buy a tumbler and any supplies that they need.

All of the land in the United States is either owned by people and corporations, or it is under the jurisdiction of government agencies or organizations. Before you collect rocks or minerals from any location, be sure that you either have permission from the landowner or know the rules for use of that land issued by the managing government agency or organization. You can get in trouble for trespassing, be hit with a very high fine or even go to jail for removing rocks, fossils, minerals, soil, plants or wildlife from many locations.