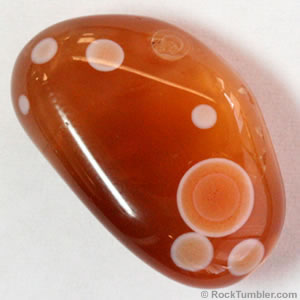 A carnelian agate with several beautiful eyes from Botswana, Africa. This specimen is about 3/4 inch in length. The image below is a close-up of the large eye.

What Are Eye Agates?

An eye agate is an agate that exhibits one or more round concentric markings known as "eyes." The accompanying photo is a tumbled stone of carnelian agate with several beautiful eyes. It is from Botswana, a country in southern Africa that is famous for its colorful and interesting agates.

As a general statement, eye agates are rare. However, some localities are well known for producing eye agates. Botswana is a source of carnelian, gray, and pink agate nodules that often contain eyes. We have photos of several "Botswana agates" on this page and close-up photos of a few eyes.

Lake Superior agates, found in the Great Lakes area of the United States, frequently contain numerous colorful eyes (see the photo of a root beer-colored specimen below). Lake Superior agates were named as the official state gemstone of Minnesota. They are also found in Michigan, Wisconsin and Iowa.

Many people are fascinated with eye agates. They marvel that nature could produce such perfect circles. Eye agates are often selected for use in jewelry, carried as pocket stones, placed in a collection, or very carefully cut into cabochons. Many people believe that an agate with an eye is a special stone of value that should be treasured. 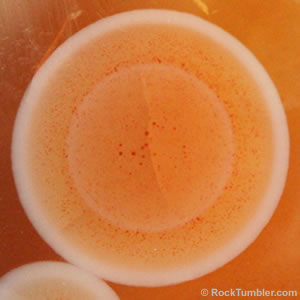 This photo is a close-up of the largest eye in the carnelian agate shown at the top of this page. You can clearly see its concentric (bulls-eye) pattern. Note how the outer layer of each agate in this stone is a solid white color. Then, the inner layers are orangy, and if you look closely, you will see an enormous number of tiny dots of a darker orange color. Every eye is different. The eyes within a single agate nodule can be very different from one another.

How Do Eye Agates Form?

Eye agates are usually found in agate nodules. These nodules form when silica precipitates within a rock cavity. This cavity is often a gas bubble that was trapped in a solidified lava flow. Or, it can be the internal cavity of a fossilized shell.

The first step in nodule formation is the movement of water, containing dissolved silica, into the cavity. A thin layer of silica begins to precipitate on the walls of the cavity and often a silica gel begins to form within the cavity.

Shortly after an initial layer of silica is deposited on the walls of the cavity, hemispherical droplets of silica gel adhere to the newly deposited agate. The silica gel in these droplets will eventually crystallize and become the "eyes".

This origin on the inside walls of the cavity explains why the eyes of an agate are most commonly found just below the outer "husk" of an agate nodule. 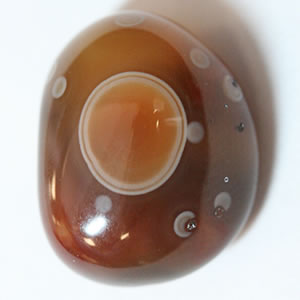 A rootbeer-colored agate from the Lake Superior region with a large eye and multiple small ones. 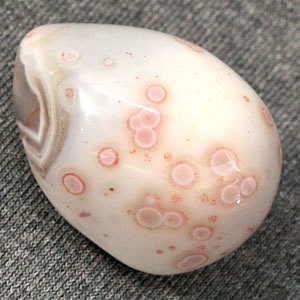 A nodule of pink Botswana agate with a white husk and several pink eyes. See the photo below for close-ups of a few eyes. 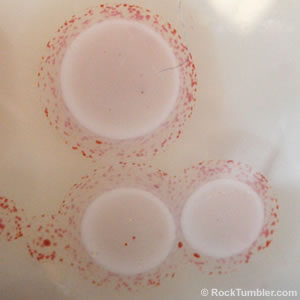 A Botswana agate nodule with numerous pink eyes on its husk.

ADVERTISEMENT
Agate nodules can be liberated from their host rocks by weathering - a breakdown of the rock material by chemical or mechanical processes - such as soil formation. After they are liberated by weathering, people can then find them in plowed fields, in stream sediments, along lake shores, and other locations.

Botswana agates are found in sediments of the Zambesi River and other streams. Lake Superior agates are often found on the shorelines of lakes, in farmer's fields, excavations, and other areas of exposed sediment or soil. 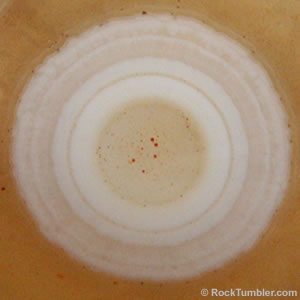 Close-up view of an eye showing many concentric layers of agate. When you view an eye like this you are actually looking at the bottom of the eye. Each of these concentric bands forms a thin hemisphere of material into the stone. 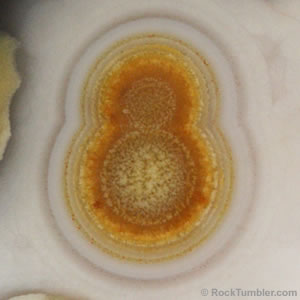 These two eyes began forming side by side with independent concentric layers. As they grew they touched one another but the concentric layers kept growing, incorporating both eyes into a single complex silica growth. From this side they have an outline like a number "8." In three dimensions they would look like two merging hemispheres. 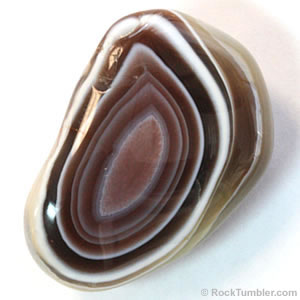 Although some people would call this an "eye agate" because it has concentric bands, the proper name is a fortification agate. It formed as described in the paragraph above.

Not an Eye Agate

Some people confuse fortification agate with eye agate. The photo at right is a fortification agate. It formed when layers were added to the walls of a cavity. As each concentric layer was added, the cavity became a little smaller. Eventually the entire cavity was filled. Although fortification agates are banded and have a concentric pattern, they are not eye agates. "Eyes" are a small part of an agate nodule; they form within the "husk" of a nodule and they crystallize from the inside outwards rather than from the outside in.