The Best Types of Rocks for a Rock Tumbler?

Most types of rocks do NOT perform well in a rock tumbler.

Here's a great collection of tumbled agates. Agate is the most popular tumbling rough because it often has great color, interesting patterns (bands, eyes, moss, lace, fortifications), translucence, and it usually accepts an exceptionally bright polish. It is usually easy to polish and is a great tumbling rough for the beginner. Jasper is another favorite tumbling rough.

What Rock Are You Tumbling?

People who operate rock tumblers are always interested in tumbling new types of rocks. They love the surprise of opening the barrel at the end of the polishing step to see what they have created.

If you mix great tumbling rough with rock that is below tumbling grade, particles, sharp edges and breakage of the below-tumbling-grade material will probably ruin the polish on every rock in the barrel.

If you are a beginner at tumbling, we strongly suggest starting with very durable rocks with a hardness of seven on the Mohs hardness scale. These include:

1) Jasper: Jasper is our top recommendation. It is an extremely durable rock that tumbles to a very bright luster. It is colorful, inexpensive, widely available. Note: Flint and chert are varieties of jasper.

2) Agate: Agate is another great material for the beginner to tumble. It is colorful, has interesting patterns, is inexpensive, and accepts a bright polish.

3) Petrified Wood: Most petrified wood is composed of the same material as jasper. If the pieces that you are tumbling are free from voids and fractures, it is very easy to produce great tumbling results.

The rocks above are durable enough to survive tumbling in tumblers of any speed, and you don't need to worry about cushioning them to prevent bruising. 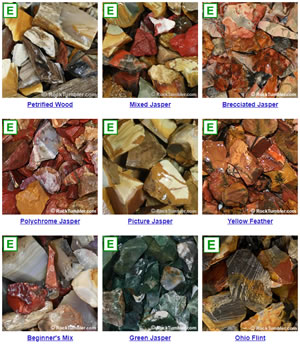 The items shown in the image above are tumbling roughs that we prepare specifically for beginners who are using small tumblers. We call them "EASY roughs" and you can find them here.

Most rock tumblers purchased by beginners today have very small barrels. If your tumbler barrel holds less than two cups of water then you should be tumbling rocks that range between about 3/8 inch and 1 1/4 inches in size.

If a tumbler is filled to 1/2 to 2/3 full of jasper, agate or petrified wood that is sized to between 3/8 and 1 1/4 inch in size, they should tumble into nice stones in four to six weeks. We have a number of "EASY" roughs that are perfectly sized for small tumbling barrels. You can find them here.

1) They are very hard. Soft rocks can be very difficult to polish in a tumbler. Those with a Mohs Hardness between about six and eight work best in a rock tumbler. Rocks harder than eight are so hard that the abrasives cut them slowly and they often do not yield a good polish in a tumbler. Study our article on the Mohs Hardness Scale then test your rocks for proper tumbling hardness. If you don't have a hardness testing kit, they are available here.

2) They are dense, without voids and pore spaces. Pore spaces trap particles of grit and carry them from one step of the tumbling process to another. This contamination of coarse, medium or fine particles in the polishing step will ruin your polish. There's nothing worse than having a great polish but your rock is streaked with coarse grit scratches. If you have rock with visible voids or pore spaces it best to keep them out of your tumbler.

3) They are free of fractures. Rocks with fractures do not make good tumbling rough. Tiny fractures in your rough can cause the rock to break up in the tumbler and the sharp edges on the broken pieces will scratch every other rock in the barrel. If you have rocks that contain visible fractures, those rocks should be broken or discarded before tumbling.

4) They have a smooth texture. Good tumbling rocks break to form smooth surfaces that are not "gritty" or "grainy." Test your rocks by rubbing them together with a little force to see if particles are dislodged. Rocks that produce granular debris when rubbed together will not polish. Instead they will produce "grits" that will scratch up every other rock in the barrel!

Agates with "eyes" are rare but if you tumble enough agate you will probably accumulate a nice collection of tumbled stones with "eyes."

Agate is the most popular rock for tumbling. It is a translucent material that occurs in a spectrum of colors. Pieces of agate often have natural decorations of bands, eyes, clouds, plumes or mossy formations. Agate's translucence often gives it an internal glow that enhances its beauty. Combine these characteristics with an ability to accept a very bright polish and you will understand why agate is so popular.

Agate is a microcrystalline variety of quartz that generally forms when ground water deposits minerals in rock cavities. Air pockets in basalts, rhyolites, andesites, limestones, and shales can be a place where agate can form. It also forms in fractures and bedding plane separations.

Agate is almost always much harder and more resistant to weathering than the rocks in which it is enclosed. When those rocks weather away agate nodules will be left behind. These nodules are frequently found in stream beds and dry washes. In some locations they can be picked up in abundance!

The bands, eyes and colorful patterns that occur in agate are a result of its crystallization history in the rock cavity and the types of impurities carried in by ground waters.

Jasper is another very popular tumbling rock. It is a semi-translucent to opaque material. It can be any color but is most often reds, earth tones and green. Most jaspers accept a very bright polish and polish easily for the beginner.

Jasper is very popular as a tumbling material. It occurs in a variety of colors but usually it occurs in white, shades of gray, and earth tones such as red, yellow, orange and brown. Occasionally other colors such as green jasper are found. Jasper's color patterns include variegations, plumes, swirls, brecciation and more. It generally accepts a bright polish and is a durable tumbling material.

Jasper is another variety of microcrystalline quartz. However, instead of being translucent it is opaque to semi-translucent. It occurs as a variety of fracture fillings, mineralizations and replacements.

Jasper, chert and flint are very similar materials. They are all opaque varieties of cryptocrystalline quartz, and there are no precise definitions that separate them.

Quartz is the most abundant mineral in Earth's crust and it often occurs in forms that meet the "characteristics of a good tumbling rough" listed above. Quartz is transparent to translucent and occurs in a wide range of colors. Amethyst quartz, clear quartz, white quartz, rose quartz and smoky quartz are very popular for rock tumbling.

Aventurine is another variety of quartz that is popular with rock tumblers and jewelry makers. It is a quartz that contains inclusions of mica, iron oxide or other minerals. These inclusions have a preferential orientation that produces a glittering appearance when the stone is viewed from the proper angle.

Tiger's eye is a popular tumbling material that forms when crocidolite is replaced by quartz. This produces a stone with a fibrous texture that interacts with incident light to produce a silky luster known as "chatoyancy."

Petrified wood is a favorite with people who do rock tumbling. The pieces of petrified wood above show distinct wood grain patterns.

Petrified wood is formed when woody material is buried in an ash fall or other sedimentary deposit and then replaced by siliceous or carbonate materials delivered by ground water. It often preserves a view of cell walls, bark, growth rings and other plant structures.

Petrified wood is a very popular tumbling material. Although it is not especially abundant, it can be colorful and the novelty of producing polished stones that exhibit preserved plant structures make it very appealing to many people.

There are many varieties of obsidian that are popular with people who tumble rocks. The rough specimens above on the left are mahogany obsidian (named for its brown wood-grain swirls). The two center obsidian specimens are rough Apache tears. The specimens at right are snowflake obsidian (named after the white cristobalite blooms).

Obsidian is a volcanic rock that forms when molten rock material cools at a very rapid rate. The cooling is so rapid that the molten rock solidifies into an amorphous glass instead of crystallizing into organized mineral structures. This type of cooling often occurs on the margin of a lava flow.

In the rough, obsidian looks like glass cullet or glass slag. It shares many properties with glass, including its conchoidal fracture, hardness of 5-6, vitreous luster and low toughness. It is a challenging material to tumble because it tends to chip and bruise. However, careful work and the use of ceramic media or plastic pellets for cushioning will allow you to produce a beautiful product.

Most specimens of obsidian are a lustrous black color, however, brown, red and other colors have been found. Some specimens contain numerous white spherulites of cristobalite which give it a black-and-white spotted appearance known as "snowflake obsidian." Other specimens have swirls of brown and black glass which are known as "mahogany obsidian." "Apache tears" are round nodules of obsidian that weather out of perlite.

Blue is an unusual color for a rock and that makes materials like sodalite, lapis lazuli and blue chalcedony especially popular with people who tumble rocks.

A few feldspars are popular as tumbled stones. These include amazonite, moonstone, labradorite and sunstone. They can be challenging to tumble because they have planes of cleavage which will cause the stone to break if it gets roughly tossed about in the tumbler barrel. The chance of breakage can be reduced by filling the barrel to the proper level and cushioning with plastic pellets or small ceramic media.

Amazonite is a green microcline feldspar named for the Amazon River, although the material is not known to occur in that area. It occurs in a variety of shades of green ranging from pale green through deep green and blue green.

Moonstone is an orthoclase or an albite feldspar with a pearly to opalescent luster and a play of light known as adularescence. It occurs in a range of whites, pinks, grays, greens, oranges and browns.

Labradorite is a plagioclase feldspar that exhibits a phenomenon known as labradorescence. This is a play of colors (usually electric blues, greens and yellows) that can be seen when the stone is moved under incident light.

Sunstone is a plagioclase feldspar that contains tiny flakes of copper as inclusions. These copper flakes have a preferential orientation that causes them to reflect light simultaneously when the stone is moved under incident light. This aventurescence produces a copper-colored flash from which the name sunstone originated.

Some people get tired of tumbling rocks all of the time and decide to try tumbling something familiar like making tumbled glass from bottles or landscape glass. Tumbled glass is popular and used in a wide variety of craft projects that range from wire-wrap jewelry to placing tumbled stones as a ground cover or accent in potted plants.

Many other types of stones are tumbled but usually not with the frequency of the varieties listed above. Hematite, lapis lazuli, lepidolite, malachite, mookaite, prehnite, rhodonite, sodalite, and zoisite are occasionally seen as tumbled stones.

Howlite is commonly tumbled, however, its white color makes it uninteresting to many people. However, it is frequently dyed to resemble turquoise.

We hope that you have a chance to tumble many varieties of stone!