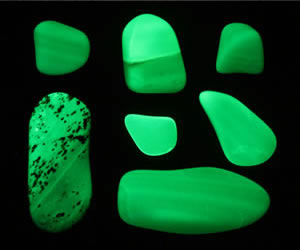 Tumbled common opal from Virgin Valley Mines under shortwave ultraviolet light. These same stones are shown in the image below. 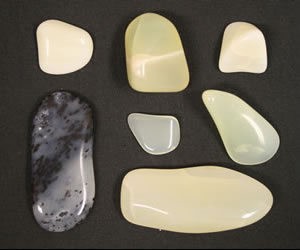 Tumbled common opal from Virgin Valley Mines under normal light. These same stones are shown under shortwave UV light in the image above.

Fluorescence in gemstones can be a beautiful property. It can also be useful in identifying many materials.

The ultraviolet lamps (called "black lights") sold in novelty stores are usually not suitable for serious observation because many of them only emit light across a small portion of the fluorescence range, or the light is only strong enough to produce noticeable fluorescence in specimens with a strong response to UV illumination.

We purchased a couple pounds of common opal from the Royal Peacock Mine, located in Virgin Valley, Nevada. They offered two types of common opal when we made our purchase: 1) moss opal; and, 2) fluorescent opal.

The opal that Royal Peacock advertised as "fluorescent opal" really lived up to its name. In daylight, the fluorescent opal ranged from a translucent, slightly yellowish white to a slightly greenish yellow color in normal light. Many pieces had subtle color zones in normal light that became much more obvious in ultraviolet light. However, when we observed it under shortwave UV light (in darkness, which is how this test should be done), we were shocked - the opal emitted a spectacular fluorescent green glow - as you can see in the photos at the top of this page. 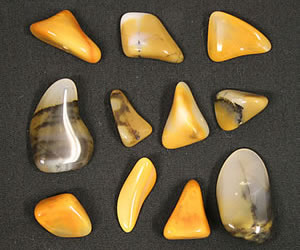 Mossy opal and honey-colored opal (both common opals) from Virgin Valley Mines under normal light. These specimens show a very weak fluorescence under shortwave UV light.
Their mossy opal had a cream to honey color in normal light. Some of it had a weak green glow under a shortwave ultraviolet lamp. A few of the cream-colored pieces showed a very strong green fluorescence.

The specimens that we show in the photos are tumbled stones; however, the rough showed the same strong fluorescence.

The Royal Peacock Mine website says that they are the world's only source of fluorescent opal. Their opal had the strongest fluorescence of any opal that we have seen; however, fluorescence in opal is found at many localities.

We believe that very few people look at opal using ultraviolet lamps (or scientific-quality lamps) - and that's why this property of opal is not widely known. If you start looking at gem materials with a mineral-grade fluorescent lamp, you might be surprised at how many fluorescent materials you find. We were surprised. 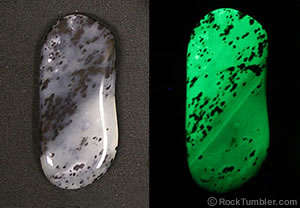 The United States Geological Survey reports that some opal in the Virgin Valley area of Nevada is uraniferous. This may account for the strong fluorescence of some opal from that area.

For more information on fluorescent opal from Virgin Valley see:

If you are interested in hunting opal in Nevada, we are aware of (at the time of this writing) four pay-to-dig sites: Bonanza Opal Mines, Kokopelli Opals, Rainbow Ridge, and Royal Peacock Opal Mine.

Please see our list of pay-to-dig sites in the United States.

When you tumble opal, you will lose a lot of weight and have no control over the shapes of the pieces. Also, opal is brittle and is easily broken in a tumbler. So, don't tumble expensive opal unless you have a lot of experience or a lot of opal (or money) to experiment.

We only tumble inexpensive common opal that we are willing to risk, or pieces of precious opal that have been pre-formed on the diamond wheel to minimize loss and assure nicely shaped stones. Better opal should be shaped and polished on a lapidary wheel where you have greater control over the shaping and polishing.

We tumbled the Royal Peacock opal in medium grit in a rotary tumbler to develop some nice rounded shapes. We then ran the fine and polishing steps in a vibratory tumbler.

Common opal is much softer (about 5.5 on the Mohs Hardness Scale) than the agate and jasper that we usually tumble (Mohs 7). So we were careful not to tumble it too long in medium grit. Our small pieces (between 1/2 inch to about 1 1/2 inches) tumbled to rounded shapes in about three days in a Thumler's A-R1 rotary tumbler.

For the Royal Peacock opal, we added it to a barrel full of small ceramic media to assure a gentle tumbling action. Our barrel contained mostly ceramic media and a small amount of opal. Opal must be tumbled with care and the expectation of some breakage. The opal that we tumbled was especially brittle. (More on tumbling opal.)

If you enjoy tumbled stones, we have photos of a few other varieties that exhibit interesting fluorescence.

Fluorite is the mineral that fluorescence is named after, and we have a few photos of fluorescent fluorite.

Moonstone often exhibits fluorescence, and we show photos and explain why moonstone is not adularescent under UV light.

The most interesting tumbled stones with fluorescence that we have seen are specimens of Ocean Jasper. The agate component of these specimens was clearly fluorescent, and its intricate banding can be a work of art under the ultraviolet lamp.

If you want to learn more about fluorescent minerals, we have an article on Geology.com (also a Geoshops.com website) that explains mineral fluorescence in great detail.