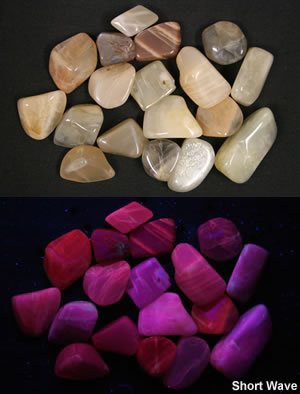 Moonstone under normal illumination and under short wave UV light. You can see another example of fluorescent moonstone (anorthoclase) at the Online Mineral Museum.

We tested some moonstone with our ultraviolet lamp and were really surprised by the beautiful red fluorescence.

The gemstone known as "moonstone" is an alkali feldspar mineral known as anorthoclase or adularia. Some specimens exhibit a beautiful red fluorescence under short wave ultraviolet light as shown in the photograph at right.


These beige, pink and gray specimens of colored moonstone are about 3/4" to 1" in size and are from a location in India. It is interesting how the twinning in some specimens in normal light can be very clearly seen under ultraviolet light.


No Adularescence Under UV Light?

Moonstone gets its name from the moonlight glow that floats just beneath the surface of some specimens when they are turned under incident light. This floating glow, known as "adularescence," is produced by a reflection of diffused light from parallel intergrowths within the stone. However, when viewed in ultraviolet light, adularescence is not observed.

Not Your Normal "Black Light"

The lamp that we used to take the UV photo at right was was a scientific-quality lamp designed for observing fluorescent minerals. This moonstone fluoresced under short wave UV illumination (also known as UVC). This is not the same UV wavelength used by the novelty "black lights" that are sold in retail stores for party use. So, if you have the type of lamp purchased at a retail store instead of one designed for scientific use you will not see the fluorescent color or it will be very very weak. (If you have a UV lamp be sure to read the safety instructions. Exposure to UV light can be harmful.)