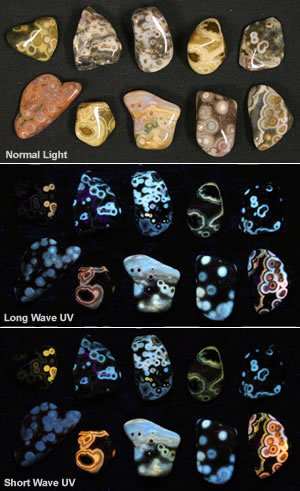 We have an ultraviolet lamp that we use for viewing fluorescent minerals. One day we decided to use it to view some tumbled stones. We were really surprised when we viewed Ocean Jasper. Many of the orbs and some of the swirls had a delightful fluorescence - under both short wave and long wave ultraviolet light!

Please Note: If you use a "black light" purchased at a retail store for party use, you might not see the fluorescence of Ocean Jasper. "Black lights" produce a very long wave length UV light that might not produce fluorescence in the jasper. You need a fluorescent lamp intended for examining minerals.

What is Ocean Jasper?

Ocean jasper is a trade name given to a silicified rhyolite produced along the northwest coast of Madagascar. Its characteristic appearance is colorful orbicular markings on a green, brown, yellow, cream, red or pink background. The orbicular pattern is produced by small spheres in the material that appear as small circles or eyes on broken, cut or polished surfaces. The orbs usually have many concentric bands that vary slightly or distinctly in color.

The wonderful colors and interesting orbs are what make ocean jasper such a popular stone. It makes beautiful tumbled stones and the material is also prized by people who produce cabochons, spheres and other small polished items. Ocean jasper has occasional small voids, which are often lined with drusy quartz. Artistic lapidaries can use these to an advantage rather than hiding them as a defect.

Ocean jasper isn't a true "jasper" because much of the material is translucent. With a close examination you will see that the orbs are generally translucent with fine banding. Some of the matrix can be transparent or jelly-like.

What Causes the Fluorescence?

Fluorescent minerals have the ability to emit light while they are illuminated by light from another source.