Home » Rock Tumbling Library » Will You Polish This Rock?

Will You Polish This Rock? 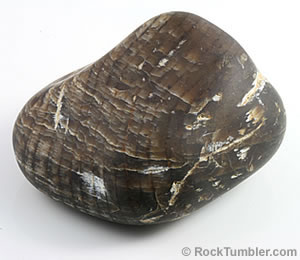 Someone gave me an awesome-looking piece of petrified wood rough about the size of my fist. Wow! It had a gray weathered surface but I could see wood grain and figured that it would produce a really nice tumbled stone. After a couple weeks of tumbling in coarse grit to remove a thick weathering rind, we opened the barrel to discover that there were lots of fractures running through the rock. You can see the results above. Phooey!

Will You Polish This Rock?

We occasionally hear from someone who has a special rock that they would like to have polished. The person does not own a tumbler, but has a one-time interest in improving the appearance of a special rock or a number of rocks. Maybe they do own a tumbler but would rather have the job done by someone with more experience.

We have tried to offer this service, but stopped offering it for several reasons. The most important is... We would return most rocks to their owners without trying to polish them.

Because upon close examination, we would determine that the rock has a fracture, or a shape, or a texture, or a mineral composition, that will not perform well in a rock tumbler. In short...

Most rocks cannot be polished in a rock tumbler. 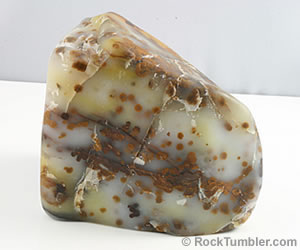 Polka Dot Agate is one of my favorite materials. I marvel at how the round black "dots" can be suspended in white to yellow agate. I had a nice chunk a bit larger than my fist. It looked "sound" upon examination by hand so I decided to try tumbling it. I placed it in a rotary barrel and tumbled it gently for about a month - using lots of ceramic media. I opened the barrel to find that it had a few thin cracks that would prevent it from becoming a nice big and beautiful tumbled stone.

For the rocks that appear to have polishing potential, we would have to tell the client that he or she might not like the results of the polishing job.

After we grind the exterior surface away hidden fractures or other defects might be revealed (see the piece of petrified wood in the photo at the top of this article, or the piece of Polka Dot Agate at the top of this section of the article) your special rock might not be so special. Or, when we open the barrel after a few weeks of tumbling the rock might have broken into several small pieces.

These are the risks of rock tumbling. The bigger the rock, the more likely it will have a problem.

We don't want to gamble with a rock that used to belong to your grandfather or a favorite rock that you brought home from a wonderful family vacation. 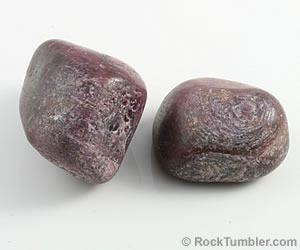 Quite a few people email us asking how to tumble the ruby crystals (and similar corundums) that they found at fee mining sites in North Carolina. Trying to tumble polish corundum of any kind will usually result in disappointment. The material is close to the hardness of silicon carbide grit and our aluminum oxide polish is actually a synthetic corundum (so they are the same hardness). You can tumble it to a weak semi-gloss finish but if you hope to produce a brightly polished stone you will probably not be successful. However, if you use a lapidary machine with diamond grinding and polishing wheels your chances of success increase greatly.

Do You Know Someone Who Does Custom Tumbling or Polishing?

If you search Google for "custom lapidary" (lapidary is the art of polishing stones) you will find a few businesses who offer the service. These businesses might have rock tumblers and they might have other tools that are better suited to polishing your special rock. Two examples of people who offer this service are: Sticks-in-Stones.com and Barnhouse Lapidary.

Some rock shops offer custom rock tumbling and rock polishing services. We have compiled a list of rock shops across the United States. Some of these do custom polishing. Many do not - so call before you drive to their shop. It is best to find a shop near you so you can visit and show them the rock that you would like to have polished.

Finding someone close to you is a good idea because that allows the person to handle the rock and examine it carefully. A few photographs sent by email are not a substitute for examining the rock's texture and condition with a hand lens and under multiple directions of light.

Some rock shops might tumble a rock for you, or they might have other ways to display its qualities in an attractive way. It can be expensive. They might have a minimum charge of $75 (or more) - paid in advance - and there are no refunds if your rock breaks or if you don't like the results.

Another option would be to find a local rock and mineral club and attend one of their meetings. Many members of these clubs do rock tumbling or other lapidary arts as a hobby. You may find a member that will tumble the stone for you or help you learn how to tumble polish stones on your own. 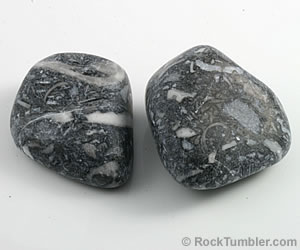 I bought some material described as "fossiliferous marble" tumbling rough. Wow! It was a great black "marble" with sharply-contrasting white fossils. (Actually, I think that a better name would be "fossiliferous limestone".) This material was soft and shaped quickly and nicely in a rotary tumbler. Then I placed it in the Lot-o-Tumbler (the machine that I use for almost all of our post-coarse grit rock tumbling). A 12 hour run in medium grit, followed by 12 hours in fine, it was now ready to polish. So far, so good. I started the polishing and after a couple hours it was starting to show a soft luster, then a couple hours later the luster was disappearing, and it finally degraded to a frosty finish. This material is just too soft to take a polish. (A couple years later we learned how to polish this material. After the fine grit step we tumbled it for one day in 1000 mesh grit. Then we cleaned and dried the stones thoroughtly. We then loaded a perfectly clean bowl (and lid) of a Thumler's UV tumbler with a bowl filled with dry corn cob media had been treated with several tablespoons of TXP polish. After a couple days of dry tumbling in the TXP-treated corn cob, our rocks had a fantastic polish.)

If I Owned A Special Rock

If I owned a special rock and wanted to have its appearance improved, I would first try cleaning it using water and a toothbrush or a plastic bristle household cleaning brush (be sure that your rock or mineral specimen is hard enough and competent enough to accept this gentle cleaning and be sure that it is not soluble in water. Gypsum, calcite and other soft minerals - softer than four on the Mohs Scale - can be scratched by this type of cleaning). Also, rocks with fractures might break under the stress of a gentle brushing. Examine carefully before you decide to attempt cleaning.


Some Rocks Are Best "In The Rough"

One of my favorite rocks is a nice piece of Crabtree Pegmatite from western North Carolina. This rock is from a mine that was operated by Tiffany and Company in the late 1800s. Why was Tiffany running a mining operation in North Carolina? Because a narrow pegmatite dike cut through the ground and near the edges of that dike the pegmatite was composed of quartz, feldspar, schorl tourmaline and emerald. Yes, real green gemmy emerald.

I really like this rock and it would make a fantastic tumbled stone, it could also be slabbed and used to cut cabochons (that's how most of this material was sold when Tiffany and Company operated the mine). I am also tempted to have it slabbed and cut a few cabs from it. I've seen Crabtree Pegmatite cabs sell for three digit numbers and I think that this rock would produce at least four good ones.

But, its a fantastic rock "as is" and has a great story behind it. Even though I like tumbled stones and cabs a lot better than I like rocks, I am going to keep it a rock because tumbling it or cutting it comes with a lot of risk and this rock is so nice and such a great conversation piece that I will keep it "as is". And, I don't think that I will ever change my mind.