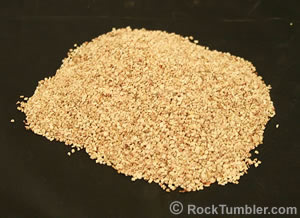 This is new unused corn cob media
Corn cob is one of the more popular medias used by reloaders to polish their brass before reloading. It is tough enough to clean brass that has minor tarnishing yet soft enough not to damage the casings. If the brass being cleaned is heavily tarnished or has not been cleaned in years it would be best to use crushed walnut shell media as it is a harder and more aggressive.


What is Corn Cob Media?

Corn cob media is corn cob crushed to a particle size that is very effective at removing tarnish from and polishing brass casings. Corn cob media is an environmentally friendly product that is long lasting and reusable. Buy Corn Cob Media 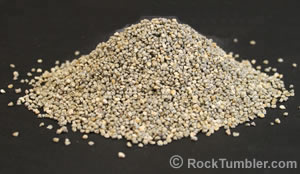 This is corn cob media that has been used twice.

Corn cob media for polishing brass can be purchased treated or untreated. Treated corn cob media comes with a polishing compound such as red rouge already mixed in. Some companies treat their corn cob media with their own proprietary brass polish. Buying treated media makes tumbling brass a simple process because there is no worrying whether or not you have enough polish mixed in the media to get a great polish. Some brass polish will leave a tint of color to the brass so you want to make sure you know what the media was treated with.

Untreated media is also available if you already have a polish that has been tested and proven to work the way you want. Untreated corn cob media allows you to experiment with unconventional brass polishing compounds that friends or forums may have mentioned work well for them.

The larger grain size will have a few negative effects. If you are tumbling brass that is not straight walled then you run the risk of this larger pet store bedding getting stuck in the casings. While this is not a major issue it will cost you time in your reloading process because you will need to manually remove the media from the casing. Using a media separator will not remove all of the stuck pieces.

Also, these larger particles of corn cob are not as effective at cleaning the casings as the smaller particles that are made for cleaning brass. This will add even more time to the reloading process as it will take more time in the tumbler to get the cases clean.

Corn cob media is best used in a vibratory polisher when polishing brass casings. The rapid vibrating action in the tumbler allows the corn cob media to better clean the inside of the shell casing because the media is constantly being shaken inside the shell case.

Corn cob media can be used in a rotary tumbler with great success on the outside of the brass casing, however, the inside of the casing will not clean and polish as well as they do in a vibratory tumbler.

This video shows how to use, and how well, corn cob media works in a Thumler's UV-10 tumbler.

How Much Media to Use

Many tumbler instruction booklets come with recommendations for brass polishing. If yours does not, below are some general guidelines to help guide you.

In a vibratory brass polisher, filling the bowl about two-thirds full with corn cob media is common practice. Then fill the rest of the bowl with casings. Once the tumbler is running you will be able to add more casings to the bowl. Add them slowly making sure that you do not add to many. If you have more shells than media it will take much longer to clean your cases as they are not going to be completely surrounded by media through the entire run. Also your casings may end up scratching each other if they are continuously rubbing against one another.

In a rotary tumbler the barrel should be filled half full with corn cob media. After the media is in add casings until the barrel is at 75% capacity. If you over fill the barrel there will not be adequate tumbling action in the barrel and your cartridges will not get cleaned and polished.

These are starting points for how much media to use. As you do more and more case polishing you may find a more suitable ratio of media to casings that works more efficiently or quicker in your specific tumbler.

The useful life span of corn cob polishing media varies depending on how much it is used. New fresh media cleans brass rapidly. As it is used it becomes rounded, dirty and clogged increasing the amount of time required to clean the brass.

When the time to clean and polish a batch of shell casing increases to about twice as long as the first run with that media, it is a good time to replace your media.

If the cases are still being cleaned in an acceptable amount of time but your not getting that nice polish that is desired it's time to recharge your media. To recharge the media replace one-quarter to one-third of the dirty media with new media and add fresh polish. Add the polish to the media and let the tumbler run for five or ten minutes before adding casings to allow the polish to spread throughout all of the media. Buy Corn Cob Media