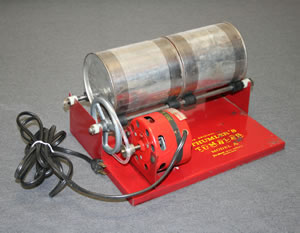 A Thumler's Model A rock tumbler from the late 1950s. Note the two paint cans that are used as barrels!

One of the First Hobbyist Rock Tumblers

The first small-scale rock tumblers for hobbyist use were manufactured in the 1950s. Many of these early machines used metal paint cans as barrels. Paint cans worked, but they were less than the ideal barrel for a number of reasons which included: 1) the metal barrels made the machines incredibly noisy; 2) the paint can lids often popped off when gas pressure built up in the tumbler barrel; and, 3) the grit and rocks tumbling in the barrel quickly abraded holes in the thin metal barrels.

The photos on this page are of a Thumler's "Model A" double-barrel rock tumbler manufactured in the late 1950s and its wonderful box. Thumler's quickly learned that the metal barrels were a problem, and they were one of the first tumbler manufacturers to produce rubber barrels that were much less noisy, much more durable, and much less likely to make a mess.
ADVERTISEMENT 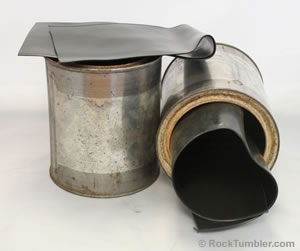 Some of the early rock tumblers that used paint cans were supplied with "barrel silencers". These were thin sheets of rubber that were used to line the inside of the can, protecting it from abrasion and cutting down on the noise. We have never used them, but we believe that they would be an awful mess! The paint cans often "popped a lid" and that made a terrible spill.

You Need a Barrel Silencer!

The noise from rocks tumbling in the metal barrels was more than the average person was willing to tolerate. So a rubber insert known as a "barrel silencer" was invented. 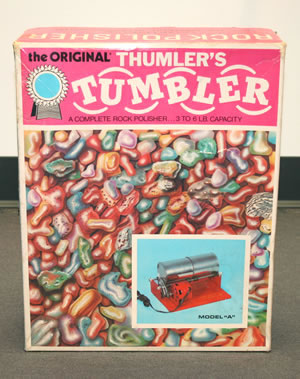 Original box for the Thumler's Model A rock tumbler shown at the top of this page.

Almost all of the other tumbler manufacturers went out of business, and Lortone and Thumler's are two of just a few manufacturers of hobbyist tumblers that are still in business today. Their machines had great designs that were built to last, and the Thumler's machines sold today look almost identical to the late 1950s machine pictured above - but they have much quieter barrels!


The Early Days of Rock Tumbling

If you are interested in learning more about early rock tumbling, see our article titled: The History of Rock Tumbling.