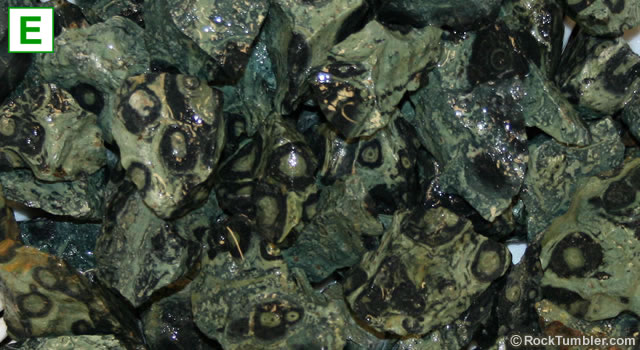 This image shows some Kambaba tumbling rough, dumped into a colander and sprayed with water to reveal its full color. The pieces in the photo are between 1/2 and 2 inches across their maximum dimension. Click on the image for a larger view. 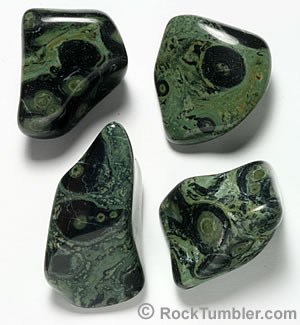 A few pieces of Kambaba that we tumbled. We really like the green and black eyes and swirl patterns in the tumbled stones.

Kambaba (also known as "Kambamba" and "Crocodile Jasper") is a green tumbling rough marked with black that is mined in Madagascar (a large island in the Indian Ocean, off the southeast coast of Africa). It produces dark green tumbled stones with spectacular black "eyes" and "orbs". The name "Crocodile Jasper" began when some people thought that the orbs looked like crocodile eyes!

All over the internet, people have been calling this material Kambaba "jasper", "nebula stone", and "fossilized stromatolite" (sedimentary trace-fossils built by sediment-trapping algae). It has been a real mystery rock.

However, the Institut für Edelsteinpr&#252fung made thin sections and went to their microscopes. They discovered that Kambaba is an igneous rock, crystallized from a viscous magma, that is composed mainly of quartz and alkali feldspars. It also contains green amphibole crystal clusters with a radial habit and fine-grained pyroxene.