Extra Coarse Rock Tumbler Grit
What You Need to Know 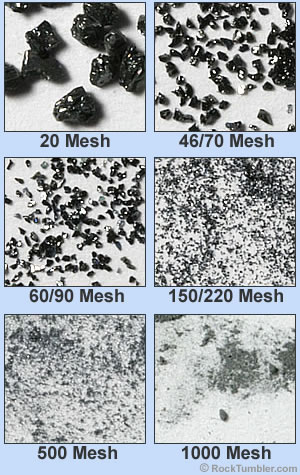 Which Grit Size Would You Use?

If you are going to tumble some jasper for two weeks in a small tumbler, which one of these grit sizes do you think will do the best job of shaping it?

In the paragraphs below we will share the results of a recent experiment that significantly changed our thinking about the sizes of rock tumbler grit and how they can be used in tumbling.

To test the effectiveness of rock tumbler grit we decided to tumble a known weight of brand new large ceramic cylinders in different grit sizes. Brand new ceramic cylinders were used because they would be a reasonably standard material.

All of the tumbling was done on the same tumbler to keep the tumbling speed constant. One-half pound of each grit was used to tumble four pounds of pellets, in one pound of water for two weeks. At the end of each two week tumbling session the final weight of the pellets was determined and the weight loss was calculated.

Graph showing the weight loss suffered by ceramic cylinders after two weeks in different grit sizes. It is clear to see that 60/90 grit was most effective.

The accompanying chart summarizes the weight loss for each of the grit sizes used in the experiment. It clearly shows that the coarsest grits (20 mesh and 46/70 mesh) were surprisingly ineffective - at least in the small barrel and for the short tumbling time used in this experiment. The next time you consider getting some really coarse grit to grind that agate to bits, reach for 60/90 instead.

If you don't believe us and want to try some 20 grit yourself, click this link to add two pounds to your shopping cart for $9.99.

The person who first decided to use 60/90 mesh grit at the start of the rock tumbling cycle was a genius!

Why was extra coarse grit less effective? Our best guess at the answer to this question is... Particles of extra coarse grit are enormous in size compared to the size of 60/90 grit particles. So equal weights of the two grit sizes will give the smaller grit size an exponential increase in the number of particles. Coarse grit might have maximum abrasive power because its grit particles are large enough to be highly effective. If you combine that with a higher number of particles, that is what produces the greater abrasive effectiveness. 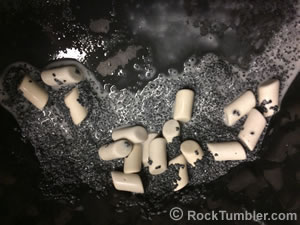 Large 20 mesh grit particles remaining after two weeks of tumbling. At this point in the tumbling most 60/90 grit had been reduced so much in particle size that it was much less effective. If the tumbling time was increased to four weeks, the grit shown here would still be removing material. So, this size of grit might be more effective than 60/90 in unattended tumbling of one month in duration of more.
An easy way to see if your coarse grit is effective is to look at what remains at the end of your tumbling. If you can see lots of coarse grit remaining in the bottom of the barrel, then you either have used too much grit, or the grit is too coarse for the material you are using and the tumbling time.

We were also surprised by medium and fine grit (150/220 and 500). They removed a lot more material than expected. Before doing this test we thought that they were only good for sanding the surface to make it smooth. Now we know that they can actually remove a significant amount of material!


Do We USE Extra Coarse?

Yes! We do have an occasional use for extra coarse grit (the 46/70 mesh grit sold at the bottom of this page). We use that extra coarse grit when we are tumbling large pieces of rough (rough of about 3" on maximum diameter or larger) in our Thumler's Model B tumbler.

Why do we use extra coarse with large rocks? We use it because large pieces of rough can easily crush particles of silicon carbide grit. We also use it because we tumble extra large pieces of rough for longer than one week. So, the extra coarse grit particles will be reduced in size by crushing and by wear over the longer tumbling period. That will help you have some particles of effective size remaining through the entire two weeks of tumbling.