What Are Petoskey Stones?

Petoskey Stones are fossils of colonial corals. The photo above shows two beautiful Petoskey stones. The one on the left is in "as found" condition from the Sturgeon River in Cheboygan County, Michigan. The one on the right is a nicely polished Petoskey stone collected in Emmet County, Michigan. Photos by David Fred (left) and the Children's Museum of Indianapolis (right) used here under a Creative Commons License. 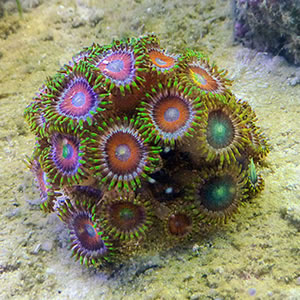 A live colony of zoanthus coral with multiple polyps open. This is an example of a colonial coral similar to the ones from which Petoskey stones formed. Photo by Kazvorpal, displayed under a Creative Commons License.

What Are Petoskey Stones?

A Petoskey stone is a fossil of a colonial coral (Hexagonaria percarinata). These coral colonies lived in a shallow sea that covered what is now the Great Lakes area during Devonian time, about 350 million years ago.

When the corals died, some of them were covered with sediment and became part of a rock unit known as the Alpena Limestone. The Alpena Limestone outcrops along the coast of Little Traverse Bay near the city of Petoskey, Michigan - the town for which the Petoskey stones have been named.

These fossil corals range in size from small specimens of a few animals that are an inch or two across to large colonies that can be up to several feet across and weigh over 1000 pounds. A modern colonial coral is shown in the accompanying photo. 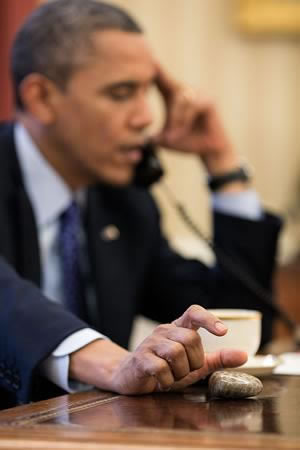 Petoskey stones can show up almost anywhere! People pick them up, carry them around and give them away. Here's a photo of President Obama with a Petoskey stone. News reports said that the stone was a gift from a Michigan resident. Petoskey stones are the "official state stone of Michigan" and the President used to fiddle with the stone when he talked on the phone. Photo by Pete Souza, White House photographer.

Dug Up by Ice Age Glaciers

During the Great Ice Age, glaciers scoured northern Michigan, breaking up the Alpena Limestone and scattering the fossil corals in glacial till across the landscape of the Great Lakes Region. Streams and waves then reworked the till, shaping many of the fossil corals into smooth round "stones". An enormous number of the coral fossils remain in the uneroded parts of the Alpena Limestone.


Today these rounded pieces of fossil coral are known as "Petoskey stones". They are commonly found along the shores of Lake Michigan, which is where many people encounter them. They are also found in and along streams, in road cuts through glacial deposits, in farmers' fields, and in quarries that mine the glacial deposits for sand and gravel. They are found at many locations along the eastern shore of Lake Michigan and in inland deposits.

Petoskey stones are a wonderful find. The ones that have been worked by streams and waves can be very nicely rounded, with a very smooth surface and a beautiful hexagonal pattern of the fossil colonial coral - like the fossil coral shown at the top left of this page. Each of the hexagonal chambers was the home of a tiny coral animal, known as a "polyp". The smooth, rounded outline, the hexagonal pattern and their attractive gray to brown color make them stand apart from other local rocks.

People who find Petoskey stones often marvel over their interesting shape and the intricate hexagonal pattern. Rockhounds have been searching for them and collecting them for over 100 years. The Petoskey stone is so popular in Michigan that it was named the official "state stone" in 1965. 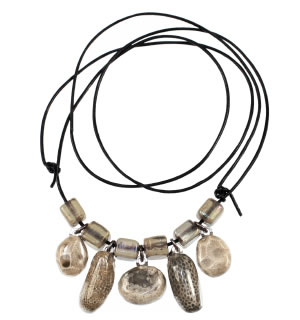 A necklace made from three Petoskey stones and two Charlevoix stones (These are similar to Petoskey stones but are Favosites, a different species of coral. Photo by OnyxRain © iStockphoto.

Petoskey stones are beautiful when polished. Polished Petoskey stones have become one of the most popular souvenirs of northern Michigan. They are also cut into cabochons, made into jewelry, and used to produce a variety of ornamental objects from bookends to clock faces to jewelry boxes.

Petoskey stones are unique to the Great Lakes Region of the United States. However, there are many other types of fossil colonial corals that can be found as rounded stones. Some of them look very similar to the Petoskey stone but have different coral patterns, different sizes and occur in different colors. Most of these are not as widely known or as popular.

In Michigan there is the Charlevoix stone, another fossil coral (Favosites) that looks almost identical to the Petoskey stone but has much smaller coral chambers. It was named after the Charlevoix area where it is commonly found. Similar corals are known from Alaska, Indonesia, Morocco and many other areas. Some are composed of chalcedony instead of calcite. 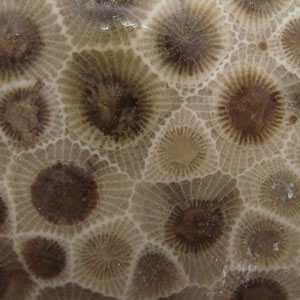 A close-up photograph of a polished Petoskey stone showing the hexagonal chambers occupied by the coral polyps. Public domain photo by Lemonpeeler.

Before you decide to polish your Petoskey stones, examine them carefully. It is likely that most of them will be unsuitable for tumbling. Those with numerous pits and pore spaces will perform poorly in a tumbler. Those with encrustations of host rock will likely perform poorly as well.

Only the best stones are able to accept a polish - these stones are solid, all coral, and without pore spaces, deep pits, or bedrock encrustations. If your stones do not meet this description, then save your time. You will probably not be happy with the results. Select only the nice solid stones for polishing.

Polishing a Petoskey Stone by Hand: In this video, Rob from Michigan Rocks demonstrates how to polish a Petoskey stone without any type of machinery. Aside from the Petoskey stones and water, the only things you will need are some wet/dry automotive sandpaper, aluminum oxide polish, and a scrap of denim fabric... plus an hour or so of free time per stone.

Petoskey stones are very soft compared to most other rocks that are polished. They are composed of calcite which has a hardness of 3 on the Mohs Hardness Scale.

Many people who polish Petoskey stones do the entire job by hand or on a lapidary polisher with an expanding rubber wheel. (In the accompanying YouTube video, Rob of Michigan rocks shows you how to polish a Petoskey stone entirely by hand.)

They polish using TXP aluminum oxide polish on a soft piece of wet cloth, such as corduroy, felt, or denim. Sanding and polishing a small stone a few inches across can take an experienced person an hour or two. 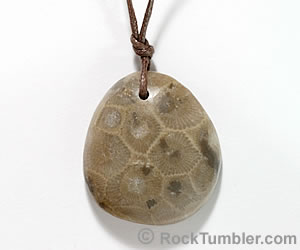 A Petoskey stone that has been polished, drilled, and made into a nice pendant. We got this nice stone from getpetoskeystones.com.

When the stone has been shaped and smoothed completely using 220 grit, then wet sand again with a 600-grit sanding belt. Make sure to sand every square inch of the stone smooth. Do a final sanding using 1000 grit if you have it. Polishing is done wet on a flat lap covered with felt using cerium oxide or aluminum oxide polish. The lapidary method is much faster than doing all of the work by hand.

Petoskey Stones in a Rock Tumbler

A rock tumbler can be used to smooth rough Petoskey stones. Be warned that you will totally give up control of their shaping if you decide to use a rock tumbler as a labor-saving method. The tumbler will be most aggressive on the points, edges and softer parts of the stone.

There is a lot less risk of spoiling the stone if you polish it by hand or by using lapidary equipment.

If you decide to use a rock tumbler, tumble the stones a day or two in medium grit (180/220). A few Petoskey stones should be placed in the tumbler barrel and surrounded with ceramic media. The media is needed to cushion the stones during tumbling. We suggest filling the tumbler barrel to its recommended capacity with a mixture of a few Petoskey stones and at least 50% ceramic media. Then add one tablespoon of medium grit for each pound of material in the barrel (stones plus media), then add enough water to cover the stones and media, seal the barrel and start tumbling.

After one or two days, open the tumbler and check your stones. Their points and edges should be starting to look like smooth curves. If you are happy with their shape and their surfaces have been totally smoothed, you can clean the barrel and wash the stones and media. You are now ready to move on to the next step. If the stones need more time for shaping and smoothing, tumble for another day and check again. Because Petoskey stones are so soft, you should check on them every day or so to be sure that you don't tumble them too long and severely reduce their size.

Your stones are ready for the next step when their surface is completely smooth. Clean the stones and the barrel thoroughly. The first grinding step might have revealed undesirable pores or fractures in some of your stones. Some might have broken or become severely misshapen during the tumble. If you find this, those stones are unlikely to polish nicely. We discard these and any stones that have pores and fractures.

After medium grit, a day or two in fine grit (500 or 600) will smooth their surface, and one day in ultra fine grit (1000 grit) will have them ready for polishing. Once they are nicely rounded and perfectly smooth, clean the stones and the barrel thoroughly. It is time for polishing.

Most people who polish Petoskey stones do the polishing step by hand with a cloth on a felt-covered flat lap as described above.

Some Petoskey stones can be polished in a rock tumbler, but it is best to dry polish them in a vibratory tumbler. This is done by filling a perfectly clean vibratory tumbler barrel to recommended capacity with corn cob media treated with a few tablespoons of TXP polish (about one level tablespoon for every two pounds of vibratory bowl capacity). Then add just a few Petoskey stones. There should be so few stones in the barrel that they will have very little chance of bumping into one another. We might tumble a dozen small (one to two inch) stones in a UV-10. If you are getting good results, try adding a few more stones to the next batch.

Tumble them for about 24 hours, and check to see if a polish is developing. (If you see corn cob media caking on your stones, you have too many stones in the barrel. Remove about half of them.) If your stones are capable of accepting a polish, you should start to see it develop within one or two days. Keep polishing as long as the appearance improves. Stop if you are satisfied with the shine or if the shine starts to disappear. It is possible to overpolish.

If you get a great polish, congratulations. You have done one of the most difficult things to do with a rock tumbler - get a polish on a stone with a Mohs hardness of less than four! Nice work! 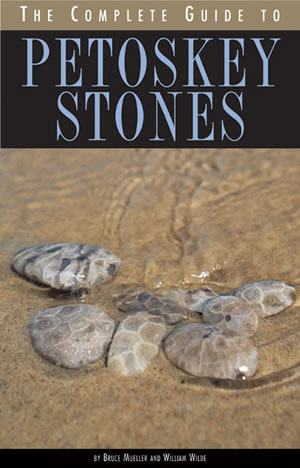 This is the best book for learning about Petoskey stones and how to polish them. We recently purchased a copy from the University of Michigan Press for only $12.95 and learned a lot from reading it. Highly recommended.

How to Polish Petoskey Stones is an article that Steve Hart, author of Modern Rock Tumbling, has published on his website. Steve decided that the tumbler was great for shaping the stones and smoothing their surface, but for polishing them he uses cerium oxide on a vertical polishing wheel.

Some history, lore and facts about the "Petoskey Stone" is a State of Michigan fact sheet. It describes how Petoskey stones are formed, where they are found and how to polish them.