Can I Use Sand Instead of Rock Tumbler Grit?

Some people write to us asking if they can use beach sand in a rock tumbler instead of buying rock tumbler grit. This sounds like a reasonable idea because sand is the abrasive material present when rocks are naturally tumbled in a stream or at a beach. However, you will probably be disappointed by its performance in a rock tumbler for three reasons... 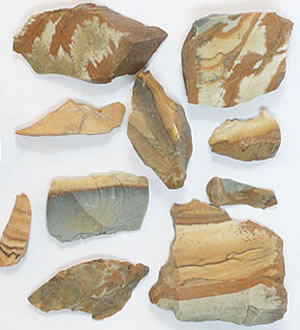 Jasper, agate, petrified wood, and varieties of quartz are the most commonly tumbled materials. They have a Mohs Scale hardness of 7 - the same as the typical beach or river sand. Because their hardnesses are equal, beach sand is an ineffective grit, compared to silicon carbide which has a Mohs hardness of 9+.

Most natural sands are composed of quartz, which has a Mohs Scale hardness of 7. This is the same hardness as common tumbling roughs such as agate, jasper, quartz, petrified wood, aventurine, and tiger's-eye. When two materials have the same hardness they are not very effective at cutting one another.


However, silicon carbide grit has a Mohs hardness of 9+ and is a much more effective abrasive. You could use sand as an abrasive for tumbling agate and jasper and it would work; however, the amount of time required to get good results would test your patience.

Most natural sands have round grains; however, silicon carbide grit particles are angular in shape. This angular shape makes them more effective at producing abrasion that smooths and rounds tumbling rough into nice polished stones. Again, you could use sand, but it would take a lot more time to produce results.

Most people interested in using sand instead of tumbling grit are looking for a cost savings. They see the cost of grit at a few dollars per pound and compare that to free sand that can be gathered at a beach.

However, the total cost of tumbling includes electricity. A small tumbler like the Thumler's A-R1 uses about ten cents worth of electricity per day. The cost of coarse grit needed to charge it is about $1.00. So, running the tumbler for seven days with coarse grit would have a total cost of $1.70 plus one week of wear and tear on the machine.

If you had to run that tumbler for three weeks to make up for the lower hardness of sand and the less effective grain shape your electricity cost would be $2.10 plus three weeks of wear and tear on the machine.

Substituting sand for rock tumbler grit will not save money. Instead it will probably cost more time and electricity than the savings of grit that you achieve. It most likely will produce lower quality results.

The only exception might be when tumbling very soft materials such as obsidian, marble, fluorite and calcite. Sand might work fine with these if you can find sand of the proper particle size. We also know that some people use sand to place a frosted finish on tumbled glass.

For more information about the costs of rock tumbling please see our article: How Much Does it Cost to Run a Rock Tumbler?