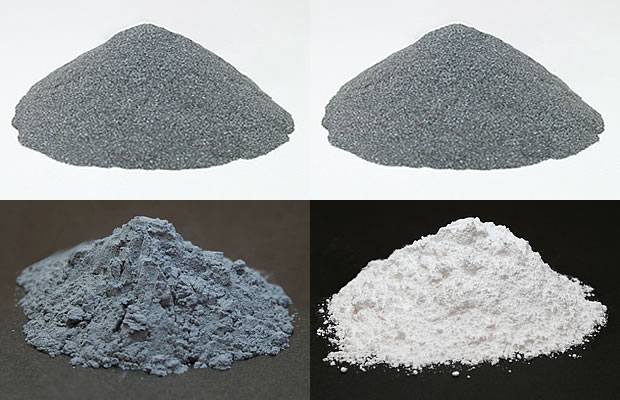 This three-step grit kit is designed for polishing rocks such as agate, jasper and petrified wood in vibratory rock tumbler. We use the materials in this kit in our Lot-o-Tumbler, Thumler's U-V10 and U-V18 tumblers, and in a Diamond Pacific Mini-Sonic tumbler. It is a three-step grit kit that includes medium grit, fine grit and #61 Rapid Polish. This grit kit comes with enough supplies to shape and polish many pounds of rock.

Here's what you get in the
STANDARD Vibratory Grit Kit...

Here's what you get in the
LARGE Vibratory Grit Bundle...


The LARGE Grit Bundle is really a good deal. Compared to the STANDARD Kit, you get 5x as much grit for about 3.3x the cost. Shipping will also be less costly than placing four or five separate orders.

Medium Grit: A 150/220 mesh grit. Most people use medium grit as the first step when using a vibratory tumbler. There is more medium grit than fine grit or polish because this is what does the shaping of the rough rocks, and you may choose to run it longer or through more cycles to get get your tumbled stones to the desired shape.

#61 Rapid Polish: A sub micron aluminum oxide. This polish has been specially sized for use in vibratory tumblers. It is a very fine particle size that will work effectively on your stones.


How we use this kit

Most people who have used a vibratory tumbler for a few years have developed their own favorite methods. Here we are sharing what we do most of the time.

We usually fill the barrel to the suggested capacity with rock and media, then add 1/2 level tablespoon of medium grit (150/220 mesh) per pound of rock (or rock plus media). Then we turn the tumbler on and add enough water to make the rock wet, but not enough to produce standing water in the bottom of the tumbler barrel or bowl. A small amount of water will cause the grit to adhere to the rock. If you add too much water, it will pool in the bottom of the bowl and wash the grit from the rock as it cycles. (For more detailed information, we have videos and more detailed descriptions for vibratory polishing in the Lot-o-Tumbler and in the Thumler's UV-10.)

We then run the tumbler for 24 hours, checking on it once or twice though the day to be sure that the rocks are wet enough to circulate freely. As the tumbler runs, the grit grinds the rocks and media, and that produces a rock mud in the bowl. If that mud gets too thick, the grinding action will be reduced. If the mud gets really thick, it can significantly slow the movement of the rock, and that can place strain on the tumbler's motor. Add water when you check the tumbler if the mud is getting thick and needs dilution.

We generally run our rough in medium grit for two to four days to get the stones shaped and smoothed nicely. Harder materials or irregulary-broken materials take the longest amount of time. Smooth, stream/beach rounded pebbles or soft glasses might require only a day or two in medium grit to cut through the weathering rind and smooth any dings and dangs. At the end of each 24 to 48 hour period we do a quick rinse of the rough, place it back in the bowl, and recharge the barrel with fresh grit.

For the fine grit and polishing steps, we use 1/2 to 1 level tablespoon for every pound of material. One-half tablespoon is enough to do the job, but we often add a little extra for the cushioning effect, since very little rock mud will be produced in these steps. Another thing that we do at this stage for a slight amount of cushioning is add ONE DROP (NO MORE!) of Dawn dishwashing detergent per every four to eight pounds of material in the bowl. The detergent will produce tiny bubbles in the bowl and we believe that it provides a slight cushioning effect on the rough. If you add too much detergent, lots of bubbles will be produced and they will interfere significantly with the grinding and polishing of the rocks.

We generally run fine grit for 24-36 hours. When polishing, we check the rocks about once every 12 to 24 hours and stop as soon as a bright polish is achieved. If you run the rocks too long in fine grit or polish, fragile materials such as obsidian, glass, and quartz will be bruised. Cleavable rocks like moonstone, labradorite, amazonite and any other feldspar will begin to fracture, or grains of polish will be forced between the cleavage planes. Polishing for extended periods usually does not improve the polish - instead it bruises your stones and wastes electricity.

That is how we process rocks and glass in a vibratory tumbler. We rarely burnish in soap but if the rocks have a foggy luster, burnising can significantly improve their appearance. We have an article and video about burnishing here.