[Transcript of the video]

A lot of people ask us: "Should I buy a rotary tumbler or should I buy a vibratory tumbler?" I would like to explain a few things about these two machines, how they work and the differences in the types of rocks that they produce. That should help you make a better decision in which type of tumbler to buy.


Differences in the Polished Stones

Let's zoom in and take a closer look at the rocks.

These are polished rocks produced by the rotary tumbler. Notice how the have been rounded they have a nice rounded shape.

These rocks over here have been produced by the vibratory tumbler. And instead of being rolled they have just been rubbed against one another. And they have retained their angular shape.

So in a vibratory whatever shape the rocks are when you put them in, they are not going to change very much. But in a rotary tumbler the rocks are going to move towards a more rounded shape. 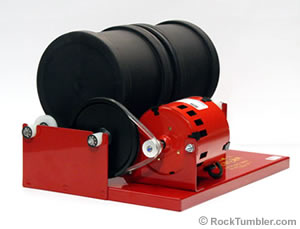 An example of a rotary rock tumbler with 2 3-pound rubber barrels by Thumler's. Rotary tumblers take about four weeks to process a load of rock - one week for each of the following steps: coarse grind, fine grind, pre-polish and polish. Some people run their rocks for two or more weeks in the coarse grind to obtain superbly-shaped gems. Check out our rotary tumblers.

Using Both Types of Tumblers

That will save time, it will also save electricity because you will be running your tumbler only a couple of weeks instead of four and it will also save you on grit and polish because the vibratory tumbler uses a lot less grit and polish, maybe half or less as much as the rotary tumbler. And that way you can have the nicely rounded stones that a rotary tumbler produces in a fraction of the amount of time and also at a cost savings.