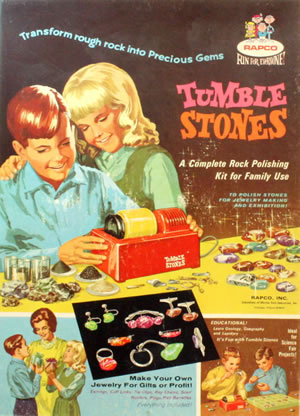 This is a photo of the original box for the Rapco "Tumble Stones" rock tumbler. This box cover shows the original "barrel" that was included with the machine. It was a thin-walled plastic jar with a screw-on metal lid.

One of the Early Plastic Tumblers

The Rapco "Tumble Stones" rock tumbler was sold in the early 1970s. It was one of the first inexpensive plastic rock tumblers on the market and had a suggested retail price of $17.95 in 1972. It was marketed as "A lapidary set for family use."

When the Rapco tumbler was initially sold, the "barrel" was a yellow, thin-walled plastic jar with a screw-on metal lid. You can see this type of barrel in the original box photo shown on the right.

Then, in about 1972, the "barrel" was changed to a thick-walled plastic cylinder with heavy ridges on the sides of the lid and bottom cover. When the tumbler was in operation, the barrel was covered by a thick "rubber band" sleeve. Our photo below and to the right shows one of the rubber band-covered barrels on the red Tumble Stones machine.

The ridges on the plastic barrel and the tacky surface of the rubber band gave the barrel much more "traction" on the drive shaft. This helped prevent a loaded barrel from sitting motionless while the drive shaft spun beneath it without getting traction. 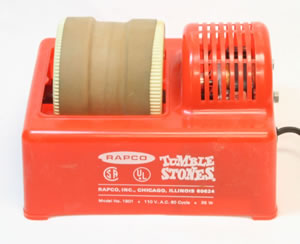 Photo of the Rapco "Tumble Stones" rock tumbler with the thick-walled plastic cylinder covered by a rubber band sleeve being used as the barrel. This is how the tumbler was sold starting in about 1972.

Rapco sold the tumbler as a "kit" that included:

The Tumble Stones machine was promoted primarily as a jewelry craft kit. The jewelry settings that accompanied the kit included earrings, cuff links, tie clips, key chains, scarf holders, rings and hair barrettes. The jewelry adhesive was used to glue polished stones to the jewelry settings. The owner was to tumble stones, use them to make jewelry and give them as gifts.

The kit was also recommended as a way to start a rock collection or to use as the basis of a science fair project. (This was probably a fine science fair project in the 1970s. Today good projects are expected to begin with an idea that will be tested, rather than show the results of a craft project.)

The rubber band-covered barrel had a very small capacity. It could tumble a few ounces of rock, and one month of tumbling would yield a small handful of stones. However, the barrel was much more durable than barrels supplied with plastic toy tumblers that are on the market today.

The Rapco Tumble Stones rock tumbler was manufactured by Martin Yale Industries of Chicago, Illinois and was sold in retail stores in the United States. Some of the tumblers were recalled because the electric motor, cord and plug did not meet safety requirements. The company does not sell any rock tumblers or lapidary products today.